As the corn harvest moves past its halfway point, yield reports really continue to be superlative.

The performance of this year's corn crop is exceptional given that growing weather in much of the Corn Belt may have been the least hospitable since 2012 with very dry conditions in many areas in August and September, though this was offset by very good subsoil moisture levels at the start of the season and generally cool summer temperatures.

Besides enhanced seed genetics, new GPS and sophisticated sensory planting equipment and increased tiling of farm ground is being credited for the outstanding yield performance this season.

This seems to confirm USDA's decision to hike the national corn yield by 1.9 bushels per acre (bpa) to 171.8 bpa in the October crop production report with the trade looking for another 0.6 bpa boost in the upcoming November crop report.

This graphic shows the number of times since 1974 USDA has increased yields from the October to January crop report in years when it had already boosted the yield from the September to the October crop report.

Since 1974, USDA has increased the corn yield 24 times from the September to the October crop report and 17 of those times they have increased it again from the October to the January report by an average of 2.4 bpa.

Breaking it down further, since 1974 USDA has increased its corn yield estimate from the August to the September report and then again from the September to the October report 13 times which is the case this year.

Of those 13 years, USDA further increased its yield estimate from the October to the January crop report 10 times with an average yield increase of 2.6 bpa.

Based on this history, continued stellar reports from the field and the fact that late season corn crop condition ratings actually went up by a large margin the odds seem good for additional yield increase in the November and January crop production reports. 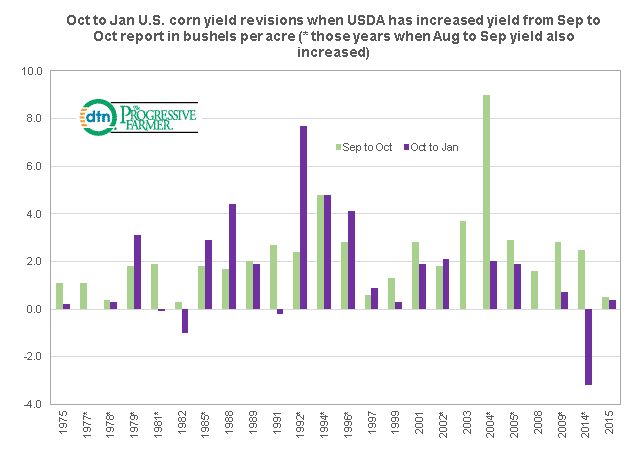