NOAA released its July 2017 state of the climate report earlier this week and noted that for the country as a whole July precipitation totaled 2.74 inches, 0.04 inch below the 20th century average and was near the middle value of the 123-year period of record.

A closer look however shows large disparities in July precipitation specifically in the Plains and Midwest.

This graphic shows July precipitation in inches for the top 21 corn and soybean producing states with three states producing just corn, three producing just soybeans and 15 others top producers of both crops.

We also show where the last month's precipitation total ranks from the period 1960-2017 with 1 being the wettest of those years and 57 the driest.

As opposed to this year, last year's corn crop was in far better condition and had greater yield potential than the 2017 crop.

This is in part due to ample July rains in most key states last year as only Colorado, Ohio, Pennsylvania and Texas had significantly more rain this July than a year ago with Indiana and Tennessee slightly wetter.

This is why North Dakota had the 4th driest July since 1960 with Iowa also in the bottom third of their usual July precipitation figure.

Note that many of the dry states in the Plains and Western Corn Belt also had less than average June rains which is reflected in the second lowest corn ratings as of the beginning of August since 2007. 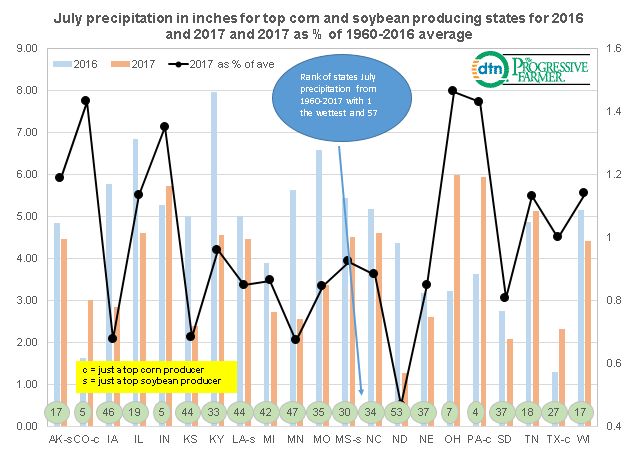