Similar to what we did with corn, this chart is an examination of U.S. weekly crop conditions in the top 18 producing soybean states as measured by the USDA as of the end of July.

Using our usual ratings system (where we weight the crop based on the percent in each category and assign that category a factor of 2 for very poor, 4 for poor, 6 for fair, 8 for good, and 10 for excellent and then sum the results), we look at end of July crop ratings for this year, the 1986-2016 average and then calculate 2017 ratings vs. 2016 ratings and vs. the 1986-2016 average.

At the bottom along the x-axis we also show the correlation between end of July crop ratings and how each state final yield deviated from the 30 year trend for the period 1986-2016.

On the other hand the Delta states are doing exceptionally well with all of these having some of their highest ratings ever and really the only ones to have ratings above year ago levels.

Recall the 2016 U.S. soybean yield was a record 52.1 bushels per acre, a whopping 11.8% above trend with a number of states also setting all-time high marks.

As opposed to corn, however, the months of August and even September are very important to soybeans hence much lower rates of correlations between end of July crop conditions and the percent that final yields deviate from the 30-year trend. 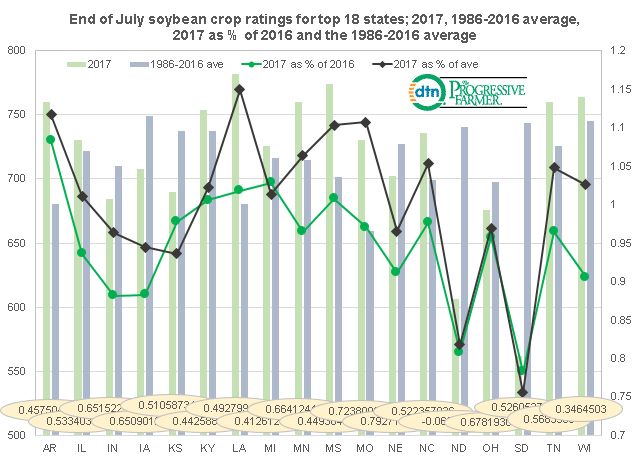