There continues to be a lot of discussion about the USDA using the third highest implied ear weight ever when it issued its 169.5 bushel per acre (bpa) 2017 U.S. corn yield forecast earlier this month.

Dry conditions and above normal temperatures in July along with some rather alarming reports from a number of crop scouts touring fields have increased skepticism about the government number though all is conjecture until the USDA releases its next report September 12th.

Work we have done in the past seems to indicate that there is a relation between temperatures and corn yields specifically as it related to corn ear weights for even with good moisture corn can be adversely impacted by high temperatures.

This scatterplot graphic shows the implied ear weight in pounds per ear vs. average July temperatures for Illinois corn for the period 1990-2016.

Each circle is associated with that year's implied ear weight and July temperature in degrees Fahrenheit.

The year label also has the Illinois rainfall for that particular July as for example 2012 having 1.40 inches of rain and 2010 having 5.35 inches of rain.

Note that a simple regression of July temperatures indicates that they explain about 51% of the variability in implied Illinois corn ear weights.

Recall from prior posts that yields in bushels per acre are based on the number of corn ears per acre and the weight of each ear.

Plugging this year July Illinois temperature of 76.1 into the formula however results in an implied corn ear weight of .3132 lbs/ear, a 9.7% drop.

Note that even in years when July precipitation is more than ample such as in 1993 and 2010 the beneficial aspects of this can be offset by above average July temperatures. 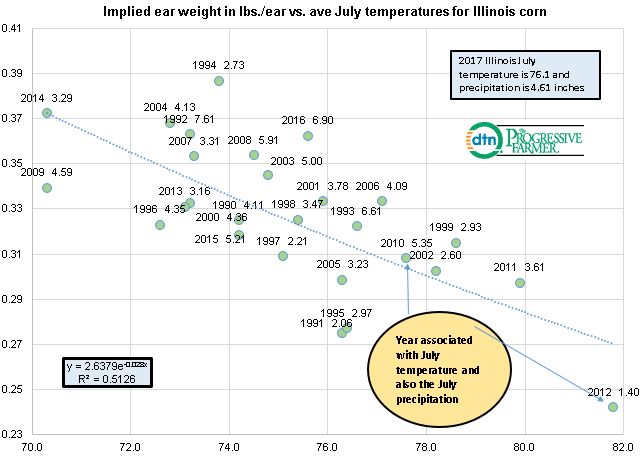