The grain and oilseed markets are seeing quite a bit of short-covering as that fundamental spark we have been talking about has arrived in the form of threatening weather with concerns that drought in Northern Plains which, according to latest U.S. Drought Monitor report, now includes some areas of severe drought will spread south into heart of Corn Belt where temperatures this coming weekend will move to the mid 90's, very high given all the moisture in the ground.

We focus on this last point for we have heard that despite ample subsoil moisture levels, the heavy spring rains have created very hard topsoils that have prevented an extensive corn root system from being established as the recent drier conditions and rising temperatures has begun to stress some of the young corn plants.

Of the 18 states, only four including MN, NC, SD and TX had Mar-May rainfall this year below their long-term average.

On the other hand some states like KS and MO had more than 150% of their normal precipitation and 6 of the 18 had 2017 March-May rainfall that ranked in the top five of all years since 1950.

With all this moisture in the ground there is concern about corn plants with "short feet" or undeveloped root systems that may come back to haunt should conditions turn drier later in the crop year. 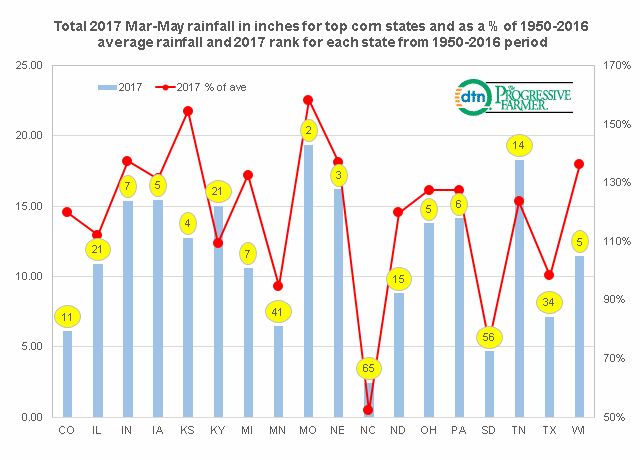 RSimpkins1489533924
6/13/2017 | 10:58 AM CDT
Southern Michigan if we miss this rain later this week we are in trouble. We already look like late July August. Burning up no rain to speak of since early May. Lots of uneven emergence