Spring wheat futures have moved higher as some moderate drought conditions have settled into areas of the Northern Plains, specifically northern sections of South Dakota and southern parts of North Dakota.

It seems quite unusual that the states of North Dakota, South Dakota, Montana and Wyoming are dry while surrounding states are quite saturated yet some spots in South Dakota over the weekend hit triple digits breaking records that had last been set in 1934, one of the hottest years in U.S. history during the peak of the Dust Bowl.

Much of the nation's hard red spring wheat is grown in the Dakotas and Montana and this is the variety of wheat that is highest in protein which is in short supply given that the volume of wheat most produced, hard red winter which is grown mostly in Kansas and surrounding states, has registered very low protein levels both this year and last.

This lack of protein is creating huge demand among millers for the higher protein hard red spring wheat (HRS) which is the contract traded in Minneapolis.

The need to procure HRS to use for blending purposes had already lifted Minneapolis futures relative to Chicago and Kansas City futures but possible yield losses due to the emerging drought in the very area where the bulk of the nation's HRS is grown has caused the Mpls-KC and Mpls-Chicago spreads to widen even more.

Along these lines the USDA released the second 2017 U.S. spring wheat crop ratings this week and using our usual ratings system (where we weight the crop based on the percent in each category and assign that category a factor of 2 for very poor, 4 for poor, 6 for fair, 8 for good, and 10 for excellent and then sum the results), this year's second spring wheat rating is 696 which is the second worst rated crop as of June 4th going back to 1986 with only the 1988 crop worse with a rating of 574.

The accompanying graphic shows the second crop rating of the year for U.S. spring wheat going back to 1986 vs. the percent that the final yield deviated from the 30-year trend.

The rather poor second crop rating may not have much relevance for final yields as the key part of the growing season is still ahead and the correlation between the first crop ratings of the year and the percent that final yields deviate from the 30 year trend is a mere 40.7%.

Nonetheless, with the forecast for this part of the country still dry it is not too early to say that the hard red spring wheat crop is in trouble as are durum wheat, oats, barley and other crops grown in that region of the country. 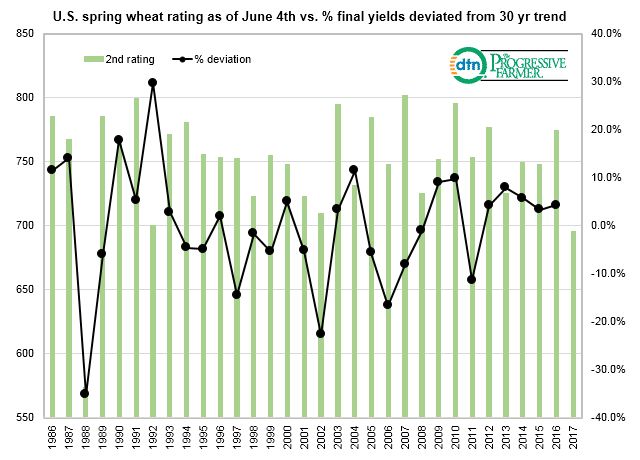