The USDA released its first weekly crop condition report for U.S. soybeans this week and the initial ratings are the second lowest of the past ten years.

Using our usual ratings system (where we weight the crop based on the percent in each category and assign that category a factor of 2 for very poor, 4 for poor, 6 for fair, 8 for good, and 10 for excellent and then sum the results), the first soybean crop rating this year was 736 vs. 754 a year ago and also below the five, ten-year and 15-year averages which are 747, 744 and 741 respectively.

Similar to what we did with corn, this graphic shows the initial crop ratings along with the percent that the final U.S. soybean yield deviated from the 30-year trend.

On the other hand, we have seen some years such as 1992 where a low first crop rating proved no hindrance to good yields with a record final yield being posted that season.

Keep in mind that the U.S. has produced three record national soybean yields in a row. 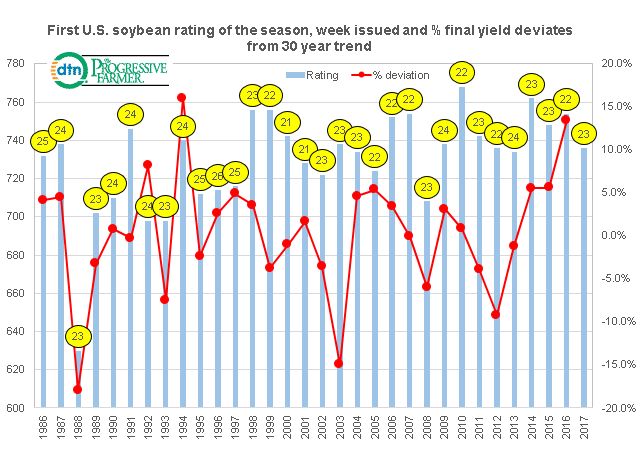