Ample precipitation this spring along with cooler than normal temperatures has made corn plantings a challenge this season, especially in the Missouri Valley and Eastern Corn Belt regions. This had raised questions about how the USDA would assess the crop in its initial crop ratings report.

Using our usual ratings system (where we weight the crop based on the percent in each category and assign that category a factor of 2 for very poor, 4 for poor, 6 for fair, 8 for good, and 10 for excellent and then sum the results), the first corn crop rating this year was 730 vs. 758 a year ago, and the five, ten year and 15-year averages respectively at 761, 754 and 744.

This graphic shows the initial crop ratings along with the percent that the final U.S. corn yield deviated from the 30-year trend.

The highest first rating of the year was seen in 1991 at 794 points on June 2nd but an unfavorable second half of that growing season resulted in final yields coming in 8.1% below trend.

Making some general observations is that a high first crop rating is no guarantee of good yields as the key pollination period is still more than a month away.

Previous Post (Percent of Corn Planted & Emerged as of May 21 )
Next Post (Early Spring Wheat Conditions vs. Deviation From Trend Yields) 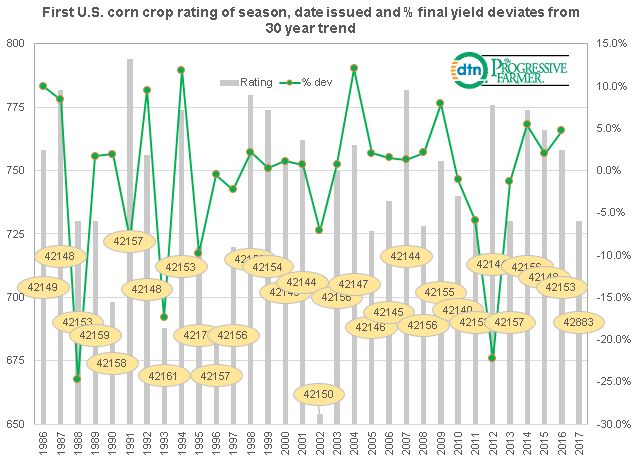