While the pace of corn seedings is close to average with the USDA indicating that 84% of the nation's corn crop has been planted by May 21st, equal to the five year average, there had been concern that the rate of germination had been delayed due to the difficulty some corn plants have had poking through the surface of the soil given recent heavy rains, then sun which has baked the soil hard, and also unusually cold temperatures for May.

This however is not the case as the USDA is reporting that 54% of the crop has emerged as of Sunday, just behind the five year average of 55%.

This graphic shows the percent of U.S. corn planted and emerged as of May 21st from 1999 to the present on the left hand axis.

The change in U.S. corn planted acreage in 1000's from the March prospective plantings report to the final acreage figures given in the annual crop production figures given in January on the right hand axis.

A look back at years when the rate of emergence was delayed showed a fair amount of intended corn never getting planted, including 1.917 million acres in 2013 when germination as of 5/21/13 was 29% and a year later when a 45% emergence rate probably contributed to the 1.20 million acre decline in corn seedings from the March intentions to the final production report.

We do note that other years such as 2002 and 2008, when emergence was also slow, did not see corn acreage fall that much but in those years the returns from planting corn were decent enough to keep producers planting that crop till the end of May.

This year the economics of planting corn are less favorable than seeding soybeans providing yet another reason for farmers to switch crops.

A bigger question is what proportion of the 84% the USDA says has been seeded will have to be replanted or given the calendar will be switched to a different crop. 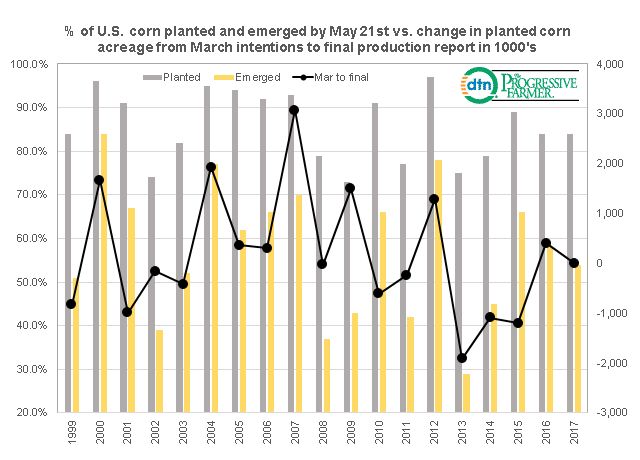