Even though it has been a less than auspicious start to spring plantings, the corn market has been very subdued for despite all the hand-wringing the nation's crop is getting planted at least an average pace.

The latest weather forecasts have been somewhat supportive to the market with more unwanted rains for parts of the saturated Midwest along with a continuation of rather cool temperatures that will limit drying and germination rates.

The last of plantings are going slow and there is now a lot of talk about replanting and much lower plant populations than seen in recent years.

The reason we bring this up is corn yields are linked to corn plant populations that have been increasing over the past number of years and ear weights, which are mostly determined by weather conditions, especially during the key pollination period.

This graphic shows the derived 10 state plant population and implied yield in bushels per acre for the ten objective states that the USDA collects plant and ear population data for.

Over time, the number of plants per acre has increased with narrower planted rows and enhanced seed genetics.

There are now some states such as Iowa and Minnesota were plant populations routinely exceed 30,000 per acre.

Inclement weather such as excess rains and drought can reduce plant populations that can have a negative impact on yields though as seen in the graphic, the linear trend is clearly higher increasing by about 260 plants per acre per year.

The correlation between yields and plant populations since 2004 is about 64% if you take out 2012.

Last year a record national yield was set at 174.6 bushels per acre with the derived 10 state yield at 181.9 bpa even though plant populations were down.

Given some inclement weather so far this season in areas of the Missouri Valley and Eastern Corn Belt, we would not be surprised to see the derived 10 state plant population count down again this year though this can easily be compensated for by a larger and heavier ear weight. 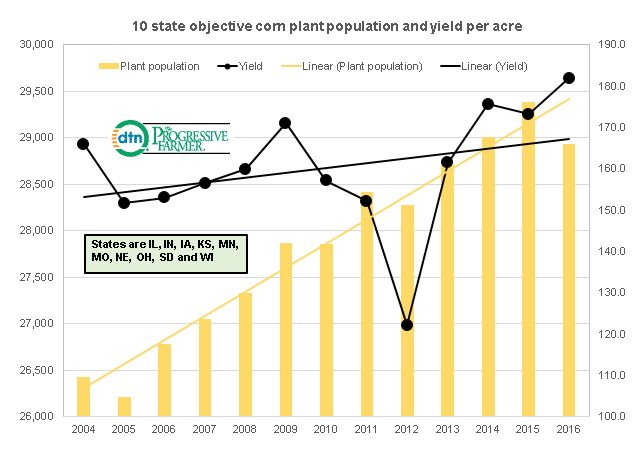