Long-time traders of the grain and oilseed markets should not be surprised by recent comments from a number of international grain trading firms that the global grain markets will remain oversupplied for a long time due to bountiful harvests and a rise in storage.

This is based on several strong seasons of growth and almost near perfect weather conditions both in North America and South America.

Global corn, wheat and soybean inventories have risen for four straight years in the longest stretch of increases since the late 1990s, according to the U.S. government data as world grain and oilseed stocks are up 48 percent since 2012/13, compared with production growth of 18 percent and consumption growth of 17 percent over the same period.

Sideways trending markets and dramatically reduced price volatility has proved to be challenging to the grain trade and a massive incoming South American row crop harvest combined with what should be another solid year of U.S. output will perpetuate these conditions.

As evidence, the accompanying chart shows the monthly range in Chicago wheat and corn futures in dollars per bushel from January 2000 to April 2017.

The mere 19-cent range in corn futures last month matches the January range and it the lowest in more than ten years, actually April of 2006 to be exact when it was 15 cents.

Meanwhile in wheat, last month's 39-cent range was higher than the 31 cent range in March 2017 which other than the 30 cent range seen in November 2013 would also be the lowest monthly range for Chicago wheat since April 2006.

We have also divided up this range in three time periods with the average monthly ranges for each.

A final note is that over the past year the average monthly range in corn has been 34 cents and that in Chicago wheat 48 cents. 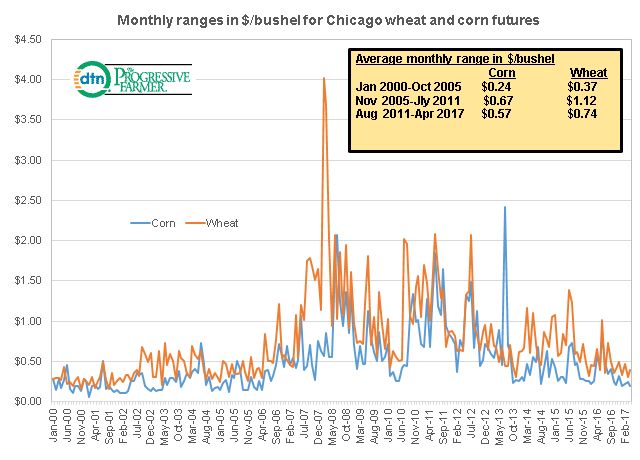