The USDA reports recently released showed lower winter wheat production based on the smallest planted acreage in over 100 years and expectations that yields will contract substantially from the year ago record.

Receiving less attention was the wheat balance sheet as both within and outside of the U.S. wheat stocks are ample.

Nonetheless, in its first look at the 2017/18 balance sheet the USDA projected U.S. exports this year at 1.0 billion bushels, which is the highest initial estimate in five seasons and the third highest since 2000.

The question is whether the USDA may be somewhat optimistic and is there any reason to think that final overseas shipments may be lower than what the USDA is projecting?

To answer this question we looked at the prior initial USDA export projections that are given in the May WASDE report which is the last one before the new marketing year starts which for wheat is June 1st to the following May 31st.

We compared that figure to the actual final export number for each marketing year and also reported cumulative new crop sales as of the first week of May prior to the marketing year starting as a percent of the new crop wheat export projection.

The most recent export sales report shows cumulative sales as of the first week of May for the 2016/17 season at 99.8 million bushels and that is 10.0% of the one billion export projection.

That is actually the lowest percent in five years when an 80.2 million sales pace was only 7.0% of the May 2012 WASDE wheat export projection.

That year final sales were 138 million bushels below that WASDE projection so even though it's early, there may be reason to believe that USDA may be paring its export projection in subsequent WASDE reports. 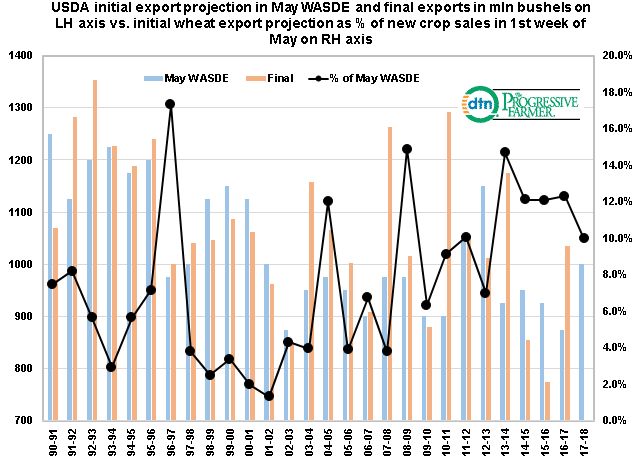