We sense some concern, though not outright panic, at the slow pace of corn plantings this year, especially after heavy rains in areas of the Mississippi Valley earlier this week amid continued cooler than normal temperatures that is also triggering some trepidation about the lagged rate of germination.

A more benign two-week forecast calling for below normal precipitation and at least normal readings has quelled nervousness along with the fact that the latest USDA weekly crop progress report showed corn seedings as of this past Sunday at 34%, equal to the five year average.

Another factor easing worries is that today's modern equipment includes 48 row plants that can seed 1200-1300 acres per day.

Finally, as this graphic notes, given an open week farmers can plant a lot of corn.

This chart shows the largest amount of corn planted on one week for each calendar year over the past 30 years based on the end of March prospective plantings report.

Both of these years were tied for the highest percent ever in one week at 43% of the March intentions figure.

This should prove comforting to those with a bearish bent on prices as the future forecast, if it verifies, the superiority of today's technology in terms of seed genetics and machinery.

Past history suggests that is plenty of time to get most if not all of the 90.0 million intended corn acres for 2017 in the ground. 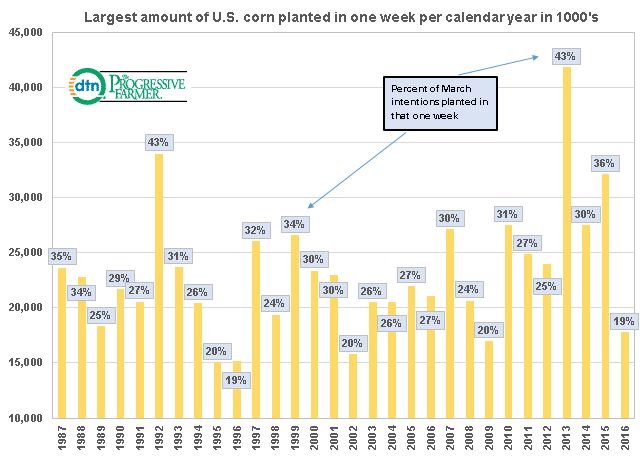