For the second month in a row, USDA left alone its projection of 2016/17 U.S. soybean exports keeping the figure at 2.025 billion bushels in the April 2017 WASDE report.

This graphic reports on our soybean export sales and shipments in million bushels as of the second week in April.

We also graph those figures as a percent of the April WASDE figure and finally the shipped to sales ratio going back to the 1989-90 season.

Current year to date exports at 2.047 billion bushels are actually 101% of the April WASDE and this is the second highest figure ever for this point in the marketing year next to April 2014, though the shipped figure of 1.785 billion bushels is only 88.1% of the WASDE figure, the lowest in five years.

The lagging shipped pace may be one of the reasons why the USDA has been reluctant to hike the export projection despite a robust export pace though here, as in the case of corn, a monstrous incoming South American crop is expected to compete intensely against U.S. production for the second half of our marketing year and well into the first part of the 2017/187 season.

Also note that the current shipped/sales ratio at 87.2% is the lowest since the 2008/09 season and actually the third lowest over the past 21 years. 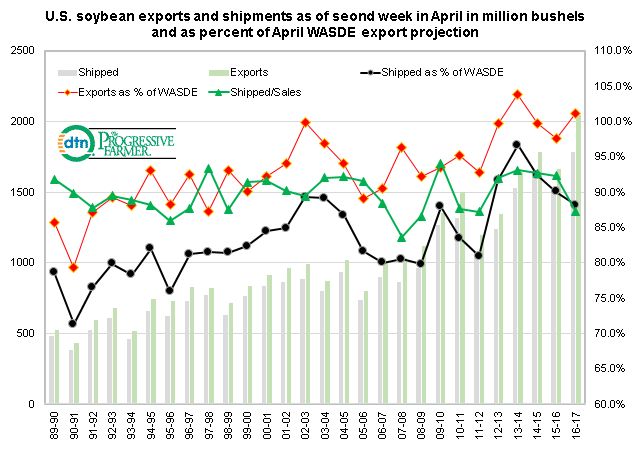