The latest weather forecasts indicate that warm and relatively dry conditions should be seen for areas of the southern Midwest and Delta that could get corn plantings off to an earlier than normal start.

Recall the USDA at its Ag Outlook Forum last month indicated U.S. farmers will plant 90 million acres of corn this spring, four million lower than last year based on more profitable net returns from seeding alternative crops such as soybeans.

Still, it has often been thought that an early start to plantings can lead to larger than intended corn acreage as farmers may be reluctant to change the heads of the planter when seedings are going so well especially when cognizant that early-planted corn can often lead to above trend yields.

This is based on the crop going through its pollination period earlier in the summer, prior to the onset of the hottest temperatures of the season and also that this can allow the crop to reach maturity faster than usual ahead of the first fall freeze date.

It has also been noted that the 2017 crop insurance guarantee based on the February average of December 2017 corn futures came in at $3.97, ten cents higher than last year which could also augur for final acreage to come in above 90 million.

Offsetting that however is the 2017 corn guarantee being the second lowest in ten years while 2017 soybean insurance guarantee of $10.19 is not only the highest in three years but $1.34 per bushel above the year ago level.

Along these lines, this graphic details the percent of U.S. corn planted by May 5th vs. the change in corn planted acreage from the end of March prospective planting figures to the June acreage survey that tallies how much corn was seeded as of June 1st.

We also report the November soybean/December corn ratio as of May 1st.

The chart does show that despite two of the fastest planting paces in recent memory (2010 when 72% of the nation's corn crop was planted by May 5th and 2012 when 68% had been seeded), in the first case corn planted area actually fell by 0.926 million acres from the March intentions to the June acreage report while two years later corn planted area receded by 1.260 million.

We should mention that despite ideal weather conditions those two years it appears that farmers were motivated by relatively stronger soybean returns to maintain their planned crop mix as the November soybean/December corn ratio as of May 1st those years were at elevated levels of 2.48 and 2.58 respectively.

We do not know what the November 2017 soybean/December 2017 corn ratio will be May 1st but as of March 20th it is a rather lofty 2.57 having traded at 2.61 last week suggesting farmers are inclined to expand their soybean plantings substantially this spring at the expense of both corn and wheat. 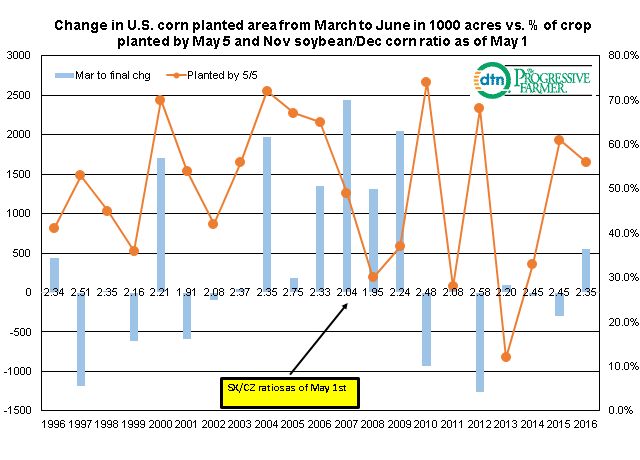