Heading into the end of March prospective planting report, expectations are that U.S. corn acreage will decline and some of that lost area, along with the already-reported 3.4 mln acre decline in domestic winter wheat seedings to the lowest levels since 1909, will spur a large rise in U.S. soybean seedings this year.

Even if the USDA does confirm the famers intend to seed the largest amount of soybeans ever is this likely to be confirmed when the final acreage figures are tallied in January 2018?

This graphic shows the change in U.S. soybean seedings from the end of March intentions report to the final planted area figures that are part of the Annual Crop Production report in thousand acres.

The correlations between acreage changes in the pace of both corn and soybean plantings are also very low.

This suggests that price considerations (the soybean/corn ratio or prospective net return per acre figures) are probably more influential along with genetic advancements in soybean seeds that have faster maturing varieties yielding almost as much as full season hybrids these days. 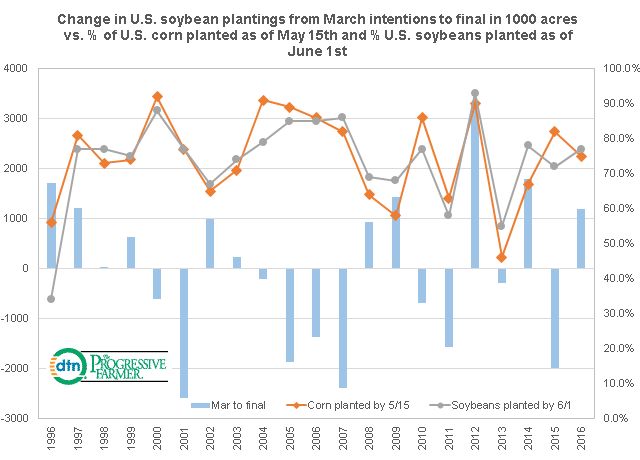