The USDA will issue two key reports on the 31st of this month including the 2017 prospective planting figures and the quarterly grain stock calculations.

There seems to be more interest in the planting intentions given widespread talk that corn acreage will contract over four million acres this year and that combined with the already announced 3.4 million drop in domestic winter wheat seedings this year could boost soybean plantings by over five million acres to another new record.

Still, some attention will be focused on the stocks report, especially for corn, as this report is the key statistic to gauge corn's feed/residual use.

The USDA has used a rather optimistic feed projection for most of the marketing year despite the lowest wheat prices in ten years, large supplies of competitively priced by-product feeds including distillers grain and corn gluten feed and very mild winter conditions that undoubtedly has enhanced feed conversion rates resulting in some loss of corn feed demand.

In fact, the USDA did make an unusual cut in the March WASDE of 50 million bushels based on expectations of higher DDG and sorghum feeding.

On the right hand axis is plotted the change in feed use from that March WASDE to the final figure calculated months later in million bushels.

Note that the USDA often changes its feed estimates after the quarterly stock reports have been released so the January, April and July WASDE estimates are the ones most likely to be revised.

In looking at the figures, Dec-Feb feed use as a percent of the March WASDE has averaged about 27.3% over the past 25 years and that trend has actually been relatively stable over the past number of years.

On the other hand, Dec-Feb feed use as a percentage of the prior quarter feed utilization has been more variable, coming in at 65.9% last year but being as low as 52.8% back in the 2012/13 season and as high as 86.8% the year before that.

A low percentage of both suggest that the USDA is overstating feed demand and note that some fairly significant downward adjustments have been seen from the March WASDE feed estimate to the final over the years. 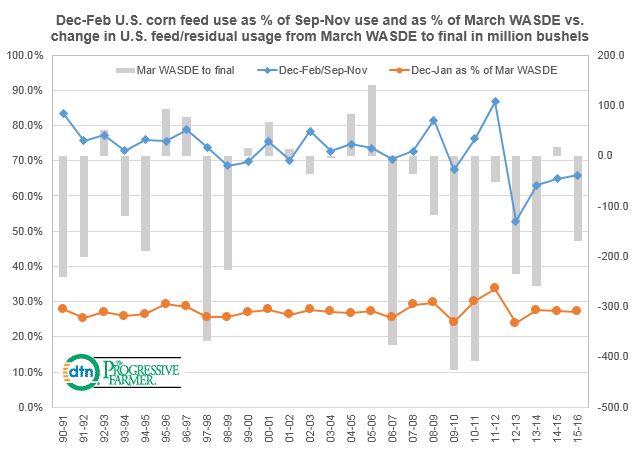