Lot of talk about how India may emerge as a large grain and oilseed importer in a few years given their robust rate of economic growth over the past decade, a population that skews heavily toward the younger age cohorts and a relatively low per capita caloric/protein intake that looks to increase rather dramatically in the near future.

Despite this, India remains one of the world's largest wheat and rice producers, which is no surprise as these are the food staples for much of the planet.

In the case of wheat however, a problem for India, which has close to 1.3 billion people (about 18% of the world population) is its relatively low wheat yields, which this year are pegged at 2.88 metric tons per hectare. As the graphic shows, this is only above Russia and well below global wheat yields along with those in China and the U.S.

As we have noted before, China grows wheat mostly for feed as opposed to milling purposes so their yields are higher than other countries that grow wheat for specific purposes and traits.

The chart also lists a table of compounded annual growth rates (CAGR) and by the looks of things Russia could soon surpass India's wheat yields with a CAGR of 3.3%, 50% higher than that of India. 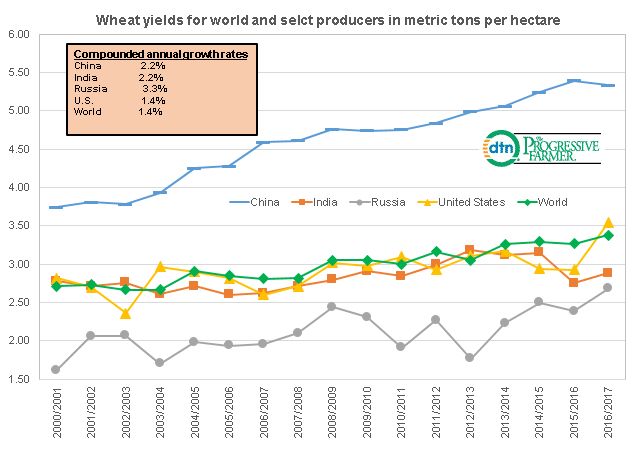