As expected, the USDA issued a rather conservative yield forecast for the 2017 U.S. soybean crop coming in at 48.0 bushels per acre (bpa), down 4.1 from the year ago record.

This forecast is based on a weather-adjusted trend model using data from the period 1988-2016, similar to the one they use for corn.

We should note that the USDA's record 2017 planted acreage forecast at 88.0 million which is 4.6 million above the final 2016 seedings may also be responsible for suppressing their yield forecasts to some extent given that some less than top ground may be moved into production.

The attached graphic shows the actual U.S. soybean yields in bushels per acre (bpa) from 1950-2016 on the left hand axis while the right hand axis is the rolling three year and five year average of the percent that these actual soybean yields deviated from the 1950-2016 trend.

The five-year average however still incorporates the 2012 yield of 40.0 bpa yield which was surprisingly only 8.0% below the 1950-2016 trend resulting in the five year rolling average of 4.2% above trend which as the chart notes other than last year is the highest since 1963. 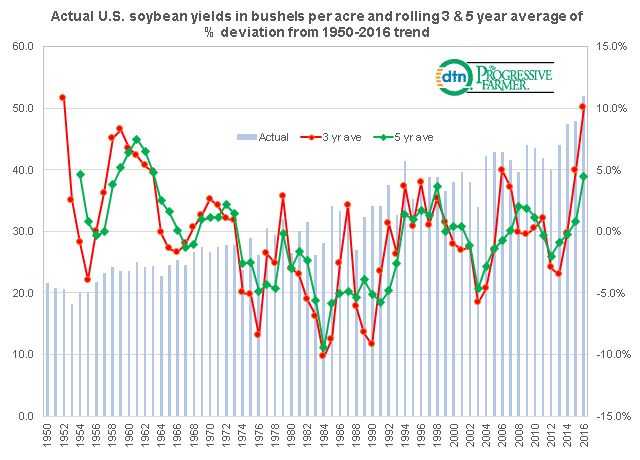