Focusing on this latter point, this graphic shows U.S. corn exports and shipments in million bushels on the left-hand axis and on the right-hand axis both the exports and shipments as a percent of the January WASDE export projection which the USDA earlier this month left unchanged at 2.225 billion bushels which by the way is the highest export figure for a January WASDE projection since the 2007-08 marketing year.

Current sales or exports through mid-January this year are 1.485 billion bushels which other than the 1.687 billion sold back in the 2007-08 season is the largest export total for mid-January at least since 1990.

This is about two-thirds of the USDA export projection, a fairly high percent and the fifth highest since 1990 though this was exceeded in both the 2013/14 and 2014/15 seasons.

The amount shipped however is a mere 706 million bushels which is 31.7% of the 2.225 billion export projection and is actually below the 10-year average.

The final marker is the percent of shipped vs. sold which is the red line also on the right-hand axis and for mid-January this year comes in at 47.5% and though equal to year ago levels it does seem low relative to past years.

The question is whether this lagging shipped pace will mean that some corn sold will eventually be cancelled.

This may be one of the reasons why, even with a very strong sales pace so far in the 2016/17 marketing year, the USDA has so far not chosen to increase its export projection though as soybean shipments slow as South America takes over we could see a brisker pace of U.S. corn shipments. 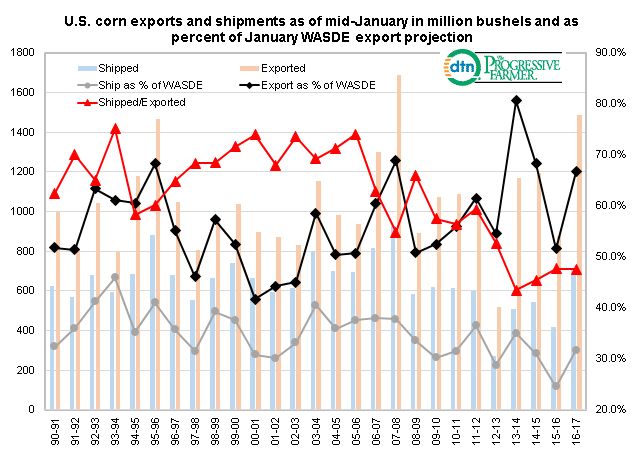