For the fourth year in a row the USDA has projected U.S. soybean exports at record high, maintaining their 2.050 billion bushel projection in this month's WASDE report.

Continuing with our series on looking at the amount exported and shipped as of mid-January for the key grain and oilseed markets this piece examines the overseas sales pace so far this marketing year of soybeans.

Also plotted on the right hand axis is the shipped to sales ratio.

Current sales or exports through mid-January this year are 1.812 billion bushels which is the largest export total for mid-January ever.

This is about 88.4% of the USDA export projection, a fairly high percent and though above the percent sold last year as of mid-January it is below the three prior marketing seasons.

The amount shipped is 1.327 billion bushels, also the highest amount ever as of mid-January and is 64.7% of the January WASDE export projection though that pace is the slowest for the past five seasons.

The final marker is the percent of shipped vs. sold which is the green line and for mid-January this year comes in at 73.3% and it's the second lowest of the past five years.

Given the strong export and sales pace so far this marketing season, there has been talk that the UDSA may increase the 2016/17 export projection in subsequent WASDE reports though there is much uncertainty in this regard.

Notwithstanding some questions about Argentine soybean output in light of their wet growing season, South American appears on their way to producing a large crop and their export offers are already competitive with ours for late January slots and then well under U.S. quotes going forward.

Furthermore, there are a number of questions about further sales to China given rather harsh rhetoric on trade being issued by the new administration.

With a large part of the South American soybean crop now going through this critical reproductive phase and China about to start a two-week New Year's holiday we suspect that the current 2.050 billion bushel projection should be maintained at least through the February supply-demand figures. 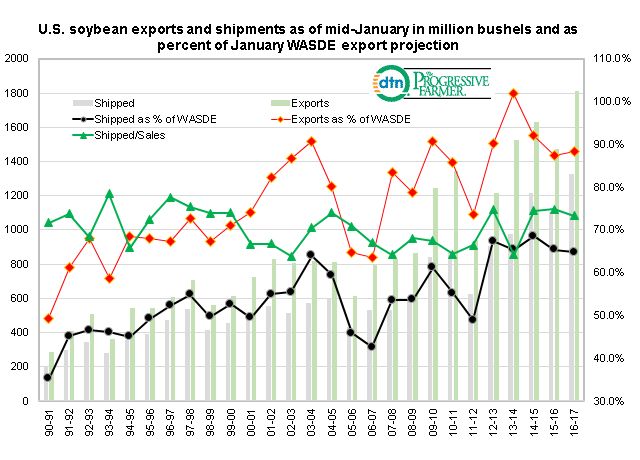