Grain and oilseed markets have started this week off with a bang after desultory price action the prior week with fund buying boosting both corn and members of the soy complex.

One reason for the surge higher has been forecasts indicating that about 30-40% of Argentina may endure dry conditions over the next three months.

The accompanying chart shows the combined USDA forecasts of Brazilian and Argentine corn and soybean exports and that total as a percent of U.S. exports on the right hand axis.

After a late season drought pared both output and overseas sales last year, combined corn exports are seen at their second highest level ever for the 2016/17 season and 36.5% ahead of the prior year.

Including this season, combined corn exports from Argentina and Brazil have averaged 118% of U.S. levels over the past five years which is more than double the 57.8% average seen from 2008-2012.

Meanwhile their soybean exports will climb to their fifth straight record as exports last year were higher than the 2014/15 season even with drought reduced crops.

This graphic also shows that their combined soybean exports as a percent of U.S. foreign sales has remained relatively consistent over the past four years at 122% as Argentina and Brazil have made far bigger inroads vs. U.S. corn export sales in recent years as implied by the more upward sloping trend-line for combined Brazilian and Argentine corn exports as a percent of U.S. sales. 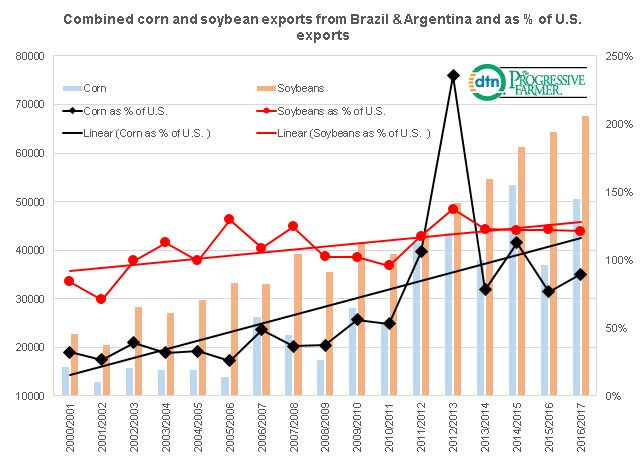