The December WASDE report proved no great shakes for the U.S. corn market as is usually the case with absolutely no changes in the balance sheet other than the average farm price range being hiked a nickel per bushel.

We suspect this will not be the case for the January WASDE as that report will incorporate the final 2016 crop production results along with the implications from the December 1st quarterly stock report.

Despite a robust overseas sales pace so far this season and record ethanol production figures amid good margins, the USDA chose not to adjust either the export or food-seed-industrial components.

Actually the most contentious area of debate with regard to corn demand is the USDA's 520 million bushel projected increase in feed/residual demand for the 2016/17 marketing year compared to the prior season.

As noted in prior posts, the USDA does not actually measure feed/residual demand but rather this is a figure that is backed into after subtracting more transparent demand components such as exports and industrial usage.

The January WASDE report is one of the more volatile USDA figures of the year for not only the December 1 stocks report is incorporated into the data but the change in corn output from the November to the January report.

Very often we see if that if production is hiked this means more bushels available for demand with forecasted prices often lower and the USDA will often hike feed demand based on this figure.

Or if the December 1st stocks number is low this may mean more corn was used as feed in the Sep-Nov quarter than had been expected and the USDA will often adjust feed demand for the remaining nine months of the marketing year higher.

On the other hand, there have been years when production goes down yet feed demand is hiked or vice-versa.

Another consideration is whether all the corn has been harvested especially in a year where harvestings have run late (not this year) or perhaps some corn is in transit and cannot be accounted for.

Regardless one trend we have seen is that over the years the Sep-Nov feed estimate as a percent of the January WASDE estimate has been moving higher to 42.4% for the most recent five-year period vs. 37.8% for the prior five-year period. 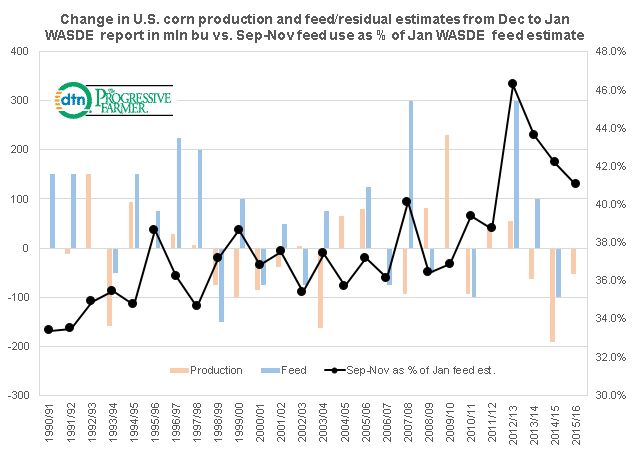