Despite a move in the dollar to 14 year highs in the foreign exchange markets, the pace of our overseas sales of soybeans has been robust, especially to China.

Reasons for their aggressive buying include U.S. domestic soybean prices that are still low in nominal terms compared to recent history and some purchases being made in case weather in South America were to take a turn for the worse as happened a year ago.

Though a resurgent dollar would seem to be negative for grain prices, countries may want to buy more heavily if they think the foreign exchange weighted value of U.S. commodities will continue to increase based on the appreciating greenback.

This however has not supported soybean meal which despite a brisk rally in soybeans and soybean oil remains range-bound.

On one hand domestic offtake has been hampered by abundant cheap wheat supplies, ample corn byproducts such as DDG, low livestock margins and very mild weather so far this fall in the main U.S. feeding areas.

A bigger problem is exports as reflected in the attached graphic that shows U.S. soybean meal export sales as of mid-November and those sales as a percent of the November WASDE estimate vs. the change in sales from the November WASDE projection to the final figures in 1000 metric tons.

As of mid-November, accumulated 2016/17 soybean meal export sales total 4.60 million metric tons which is the lowest in four years for this point in the marketing season that runs from October 1st to the following September 30th.

That is 42.3% of the USDA total export projection of 10.884 million given in the November WASDE report and this is the most sluggish export pace since the 2008/09 year when total sales as of mid-November were 35.0%.

That year was one of the few occasions over the past 20 years where the USDA has lowered its export projection from the November to the final figures but even after this month's 300,000 metric ton reduction in estimated exports the USDA may have further downward revisions in subsequent WASDE reports. 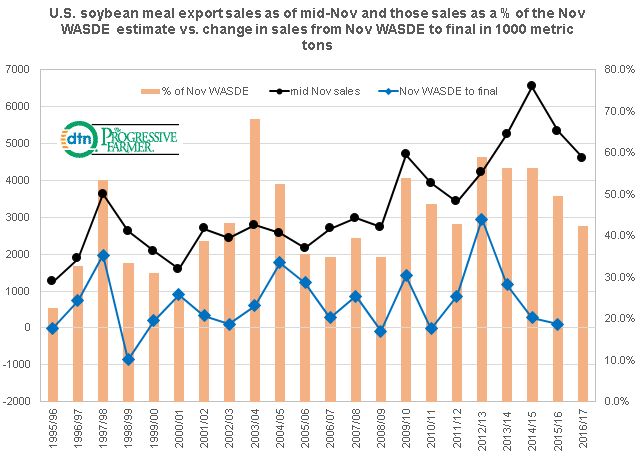