The USDA upped its 2016 U.S. corn yield projection by a sharp 1.9 bushels per acre (bpa) in its November crop production report with the yield at an even higher all-time peak of 175.3 bpa.

Even though the USDA had lowered its national corn yield projection in both the September and October crop reports, in a prior post we had pointed out that the 12 times this had happened since 1970, six times the government reversed course and hiked the corn yield in the November report.

We have updated the chart that shows the USDA corn yield estimates for the top producing states and the U.S. in bushels per acre, that yield as a percent of the 1989-2015 trend and where that 2016 yield ranks for each state in the 1989-2015 range.

No doubt the 2016 U.S. corn crop will go down as one of the best in history as evidenced by a yield that is 5.9% above trend with six of the top 18 states having their best yield ever.

Only four states saw below trend yields including OH, MI, PA and Texas. 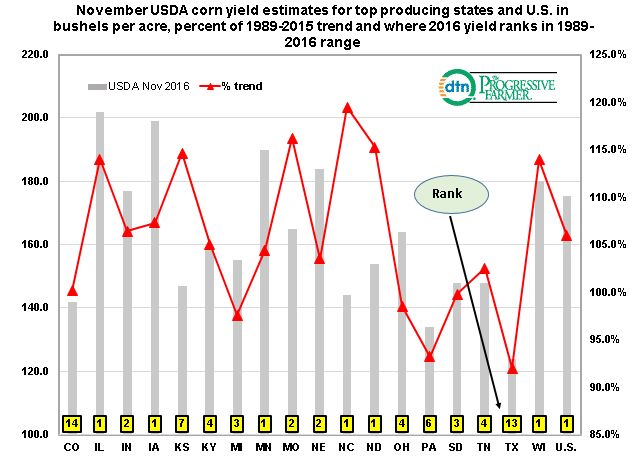