In the wake of the USDA August crop production report released last week it appears that the trade is more willing to embrace the record U.S. soybean yield forecast of 48.9 bushels than the corn projection of 175.1 bpa.

There continues to be sentiment that in some areas of the Midwest a combination of too dry conditions and warm temperatures may have adversely impacted the corn pollination process in some states resulting in some reported cases of tip-back, a condition that results in corn kernels not filling all the way toward the end of the year.

This could result in lower ear weights though interestingly the USDA is saying that their 10 state objective implied ear weight figure is record high.

In this piece we take a look at July temperatures in the top corn and soybean producing states given the realization that all things being balance corn likes cool as opposed warm July temperatures.

This graphic shows the July temperatures for this year, the record soybean yielding season of a year ago and the record corn yield season for 2014, all plotted on the left hand axis.

The difference between this year's July temperatures and the 1960-2015 average is plotted on the right hand axis, also in degrees Fahrenheit.

Though the July 2012 readings were much hotter it appears that if the final 2016 U.S. corn yield comes in lower than last week's 175.1 bpa projection, a possible answer may be the warmer than normal July 2016 readings in the key producing states. 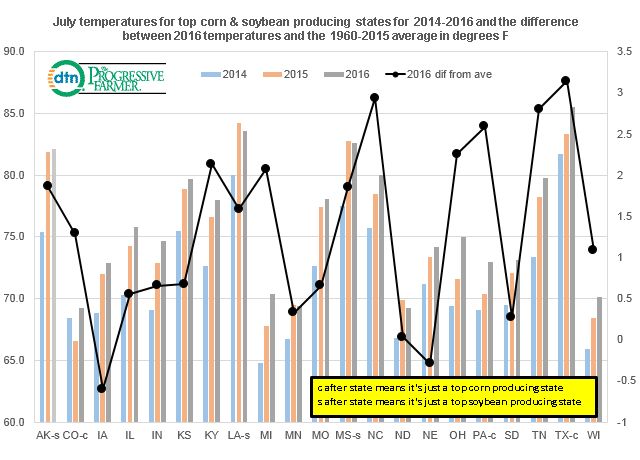