Despite the USDA issuing a bearish soybean production report last week showing record output and yields well above trade expectations, the soybean market has posted slight gains since the report's release as the market focuses on a buoyant demand outlook.

This is especially true for exports where the lowest U.S. soybean prices in many years along with sharply reduced competitor supplies has the USDA forecasting record exports for the 2016/17 season.

A large percent of these overseas sales will be targeted towards China for in 20 years Chinese import demand for this oilseed has moved from nothing to over 87 million metric tons for the coming season as their imports now account for 64% of total global soybean trade vs. a mere 2% back in the 1995/96 season.

Needless to say there will be a lot of scrutiny over the pace of Chinese soybean imports but with the USDA having notoriously underestimated demand for U.S. soybeans quite often over the past number of years the market is willing to bank on this aggressive export number.

We should mention that despite all this optimism over the buoyant export picture, the accompanying graphic (showing new crop U.S. soybean export sales in million bushels as of the first week of August and those sales as a percent of the new crop August WASDE projection) indicates that while new crop soybean sales total a solid 505 million bushels that is actually the second lowest total of the past five years and accounts for only 26% of the 1,940 billion export projection and other than last year's 20.67% figure at this stage of the year is the lowest export percentage since the 2009-09 season.

Suffice to say while there has been a string of recent soybean export sales announcements to China, this is going to have to be an ongoing event if the U.S. is to attain this record export projection. 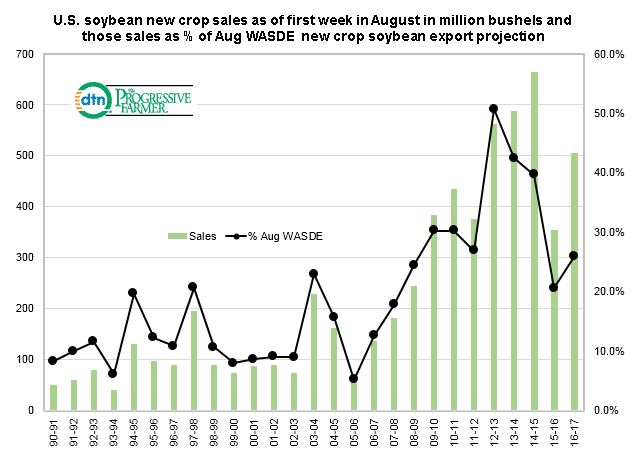