The USDA weekly crop condition report in week 30 is scrutinized quite extensively by the trade as this coincides with the end of July-beginning of August, the exact same time period when the USDA field enumerators are out looking at the crops to prepare estimates for the August crop production report.

With corn more advanced than soybeans at this stage of the growing season there seems to be sentiment that the corn yield figure will be more realistic than soybeans and this is the crop where the historically high crop ratings should translate into a higher yield estimate than the 168.0 bushel per acre figure currently being estimated.

Speaking of crop conditions, this piece looks at U.S. crop conditions for the top 18 producing states and the U.S. as of week 30 using our usual ratings system (where we weight the crop based on the percent in each category and assign that category a factor of 2 for very poor, 4 for poor, 6 for fair, 8 for good, and 10 for excellent and then sum the results).

The week 30 results for this year are tabulated and graphed on the left hand axis while this year's rating is also expressed as a percent above or below the 1986-2015 week 30 average on the right hand axis.

A national crop rating this high suggests very good ratings throughout the key producing states and this is the case as only Michigan off 0.2%, Ohio off 2.3% and South Dakota off 3.9% have 2016 week 30 conditions below their respective 1986-2015 average.

The best states include Illinois at 11.2% above their average, Missouri 14.2% above average and Wisconsin at 12.6% above their 30 year average.

Interestingly despite this being one of the best years not one of the 18 states has their highest week 30 ranking with the best being Wisconsin the highest at their third best ever.

Even in 2014, the last record yielding year two states had their highest week 30 ratings. 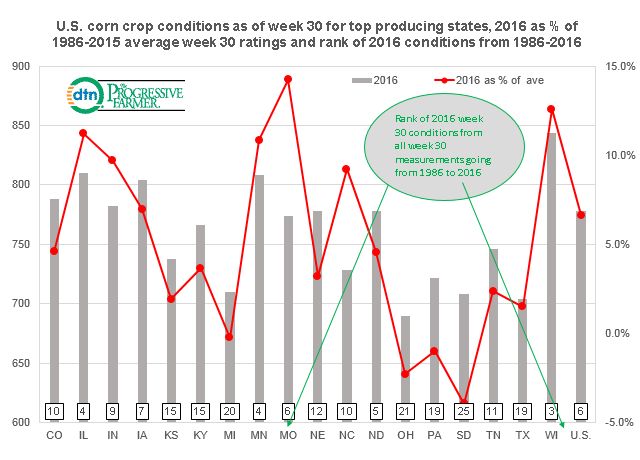