How big is big?

That is the question traders will be asking themselves heading into the August 12th USDA crop production report.

With generally favorable weather all growing season, historically high crop ratings and now pictures flying around the Internet of fabulous looking corn it appears that the only question is how far above the prior 171.0 bushel per acre (bpa) set in 2014 will the USDA estimate the 2016 national corn yield.

To help answer that question the accompanying graphic shows the week 30 (end of July-beginning of August) crop rating [using a system where we weight the crop based on the percent in each category and assign that category a factor of 2 for very poor, 4 for poor, 6 for fair, 8 for good, and 10 for excellent and then sum the results] as the 2016 week 30 (end of July-beginning of August) rating is 778 and plotted on the right hand axis. On the left hand axis is each year's week 30 rating as a percent of the 1986-2016 average and the percent that final corn yields deviated from the 25 year trend. 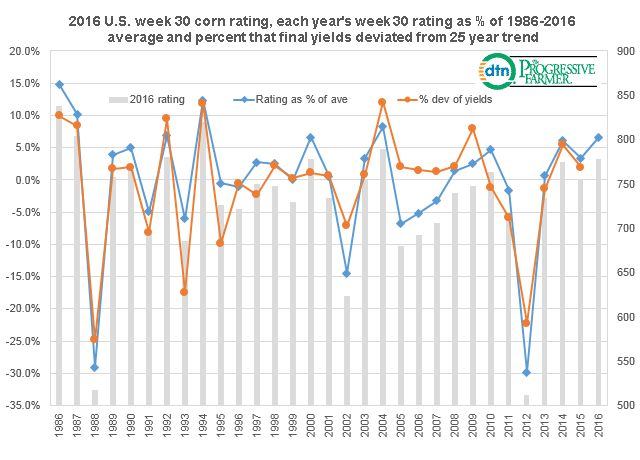 Unknown
8/7/2016 | 5:44 AM CDT
What if you use temperatures of the last 30 years and does the yields go down in the years with above temps? Have seen pictures of ears with more tip back than normal. Don't think the yields will be record breaking like some think. When crop tour starts there might be some surprises and not all high yields like many see driving by a field in their cars or pickups.