Favorable weather during July led crop prices and most feed ingredient values lower as last month wheat prices were off 30 cents, corn down 30, soybeans declining by $1.80 per bushel, soymeal down $63.00, and soyoil off 205 points.

The 30 cent tumble in December corn from $3.73 to $3.43 represents an 8.0% decline in values during July, the most critical month for corn crop development as that is when the plant goes through its critical yield sensitive period.

This graphic tracks the price action of December corn during the month of July in percentage terms vs. the percent that final U.S. corn yields deviated from their 25 year trend.

Looking at the chart, it appears that new crop corn prices decline in July when weather is deemed favorable resulting in final corn yields that are above trend, while adverse growing conditions in July often can lead to price rallies.

2013 also saw negative price action in July when final yields were 1.0% below trend but the prior three years saw corn prices in July advance based on yields below trend.

We should note that the drop in yields in 1993 was linked to flooding rains that year but the market only belatedly realized that excess moisture can also be devastating to crops, while in 1988 the drought started so early that prices ran sharply higher in May and June and then fell in July as the market realized the depressing impact high corn prices would have on demand. 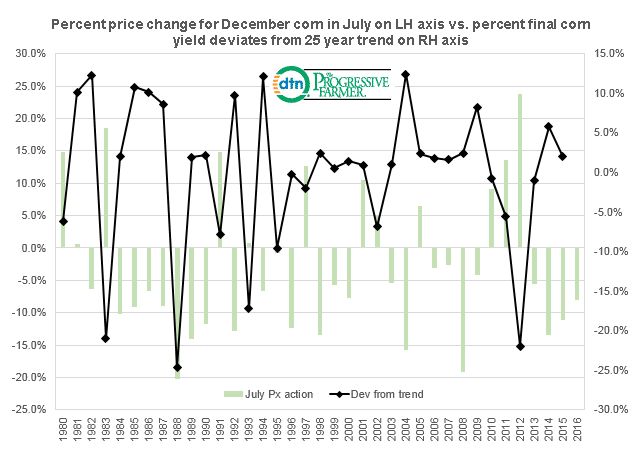