After a nascent rally based on talk that some sort of meeting between the world's largest oil producers was being arranged, the realization that no large producer wants to cede market share and this week's API inventory report showing the largest U.S. supplies since 1980 resulted in crude oil posting its biggest one day loss in seven years.

Prices remain at the lowest levels since 2003 as some analysts feel that $20 per barrel is a likely target.

Plunging crude oil has pressured gasoline values which in turn have weighed on ethanol prices with current plant operating margins at unprofitable levels.

This got us thinking about the crude oil-corn relation in terms of pricing and correlation.

In past years, there has been times when corn price movements were highly correlated with price action in crude oil as they were tied together by ethanol.

Except for a nine month period during the Great Recession, crude oil had spent much of the 2005-2014 above the $70 per barrel level that supported both gasoline and ethanol values.

The accompanying chart shows that this often resulted in the crude oil-corn correlation topping 80%.

Now with ethanol production having plateaued and the resultant crash in prices, there is no longer a high correlation.

This graphic also plots the crude oil-corn price ratio along with the long-term average and plus and minus one standard deviation lines.

The price ratio recently reached a low of 7.20, by far the lowest of the past 15 years and indicates that crude oil is cheap relative to corn or corn is expensive relative to where crude oil is trading.

This may have more relevance when the correlation between the two is high whereas now that is not the case.

Nonetheless with crude oil currently priced at $32.20 per barrel the average ratio of 17.34 implies corn should be trading for $1.86 per bushel while the minus one standard deviation line at 11.67 implies corn trading at $2.76 per bushel.

Conversely, holding corn steady at its current price of $3.70 per bushel implies crude trading at $64.16 per barrel at the average ratio and at $43.18 per barrel.

The bottom line is while crude oil and corn no longer have a very close price correlation, it does seem that crude oil is undervalued vs. corn or corn expensive vis-à-vis crude oil based on historical relationships. 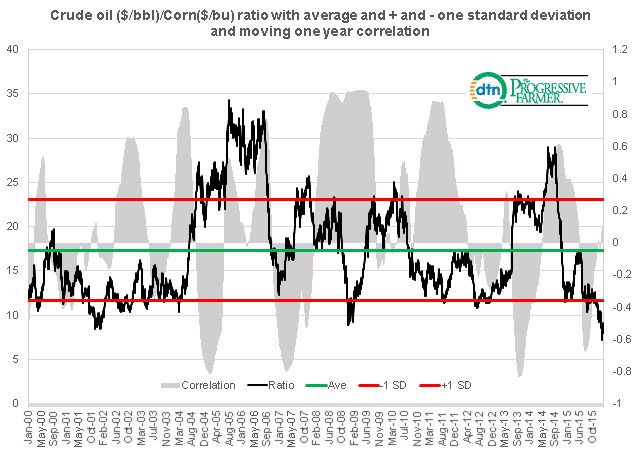 Freeport IL
2/8/2016 | 5:01 PM CST
We wonder how many "Ag Banks" are holds of "Oil Paper"? And whether that position will hinder their ability to stay with poor performing Ag Loans in the coming years? Oil at $100 per barrel, cost of production at $40, little and/or declining local demand of quality loans, increasing deposit from money looking for "save" home and a "Fed" push investment rates down, may have made participation in "Fracking" loans an attractive option for many banks. That is until oil price moves to $30 and under; $10 or more under the cost of production. The problem with low oil prices is not only in the oil patch, it is in the financial sector as well. It will not be the shock of the "Housing Crisis" but it will be significant. We suspect there will be nonperforming oil loan showing up in locations in and way from the "Fracking" areas. Time will tell the longer term affect on Agriculture. Freeport, IL