In its January 2016 WASDE report, the USDA pared its projection of U.S. soybean exports this year by 25 million bushels to 1.690 billion citing lower domestic supplies given the 51 million bushel drop in final production.

One can also add the high valued U.S. dollar, ample supplies of cheaper product out of South America and ideas that China's economic deceleration will reduce their import demand from the feverish pace the past few years.

This graphic shows U.S. soybean exports and shipments in million bushels as of the third week in January for the past 25 years and those sales and shipment figures as a percent of the January WASDE.

The latest export sales report pegged current sales at 1.494 billion bushels which is the lowest figure in three years though still the third highest ever for this point in the marketing season.

As a percent of the January WASDE export figure of 1.690 billion bushels, the current sales pace is 88.4% and the lowest in four years while the shipment pace is 67.9%, the lowest in three seasons but still the third highest ever.

Note the current USDA export projection is 85 million below their original forecast for the 2015/16 season issued back in May but the current estimate appears solid for now based on the current sales and shipment pace. 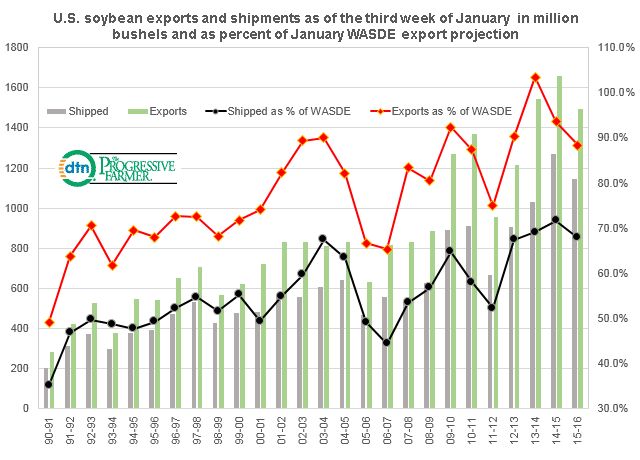