Both soybean meal and soybeans are trading close to seven year lows with U.S. ending stocks and those supplies as a percent of total usage the highest since the 2006-07 season.

For the second year in a row, U.S. soybean output is record in terms of both yields and production and this has also swelled global supplies augmented by a third year in a row of record world production.

These huge supplies have depressed soybean and soybean meal values with additional selling pressure seen from a generally favorable start to the South American growing season with another bumper crop expected out of both Argentina and Brazil.

A carry market is when the nearby futures are priced lower than the deferred contracts which is often the case for the more distant months have increased storage, interest, and uncertainty as to future supplies imbedded within their price.

Soybean meal spreads have actually been inverted over the past few seasons with the nearby priced contracts priced higher than more distant months which is generally indicative of tight supplies.

This is reflected in the chart which looks at the July-December soybean meal spread as of the first of the year since 1987 in $ per ton and plots that vs. the final year soybean stocks-to-use ratio.

The soybean stock-to-use ratios have been very low over the past few years reflecting huge demand linked to enormous U.S. soybean exports to China and some short crops with the ratio two years ago the lowest ever as we literally almost ran out of soybeans prior to the 2014 harvest.

Of course no surprise that this year's soybean stocks to use ratio of 12.4% as reported in the November 2015 WASDE report is the highest since the 18.7% stocks-to-use ratio back in 2007. 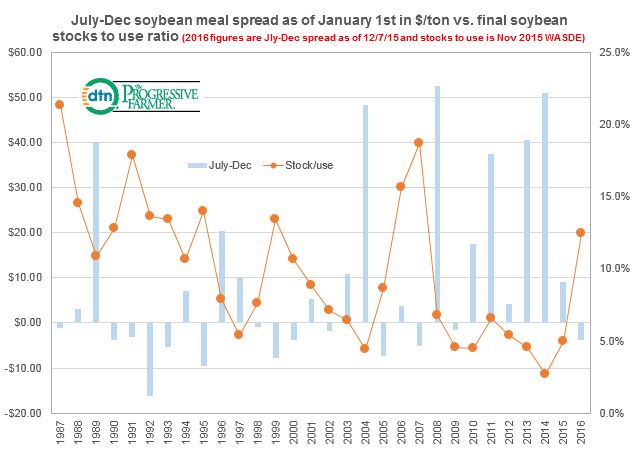