Canada's Consumer Price Index fell by 0.5 percentage points to 6.3% in December, a second monthly drop and down from the 8.1% reached in June. This is shown by the trend in the green line of the attached chart. This is the lowest rate of inflation reported since February 2022. Despite the easing prices seen overall, there still remains wide-spread belief that the Bank of Canada will increase their policy rate by another 25 basis points, which may come as soon as Jan. 25 when the next scheduled rate announcement is to be made.

Dr. Sylvain Charlebois of Dalhousie University has tweeted that Canada's food inflation is the lowest seen in December across the G7 nations, while noting that Japan's data for December has yet to be released. This is of little relief to consumers, with Jagmeet Singh, leader of the national New Democratic Party, tweeting about recent findings that have made rounds on social media which included a $42 Caesar salad being offered by one grocer and $37 chicken reported by another. Consumers across the country face escalating food costs along with rising prices for other household needs, such as utilities.

As seen on the attached chart, the year-over-year price change for food purchased from stores (blue line), fell by 0.4 percentage points to 11%, after reaching an 11.4% high in both September and November. The relief indicated in Statistics Canada's grocery store data is gradual and likely unnoticed by consumers.

As seen with the black line, the year-over-year price change in dairy products and eggs remained steady at 12% in December. On Feb. 1, a previously announced 2.2% (less than 2 cents/liter) increase in the farm gate price for milk will kick in, adding further to costs.

It is also interesting to note that the brown line, which represents the year-over-year price change for bakery and cereal products, has fallen from a high of 16.9% reached in October to 14.7%, with prices rising at a faster pace than food overall and more than two times the increase seen for all items in Canada reported by Statistics Canada. While not shown, this price change exceeds the year-over-year price change of vegetables, reported at 13.7%, despite the huge volume imported this time of year while being purchased with a weaker Canadian dollar that results in diminished purchasing power.

While not shown, the year-over year price change in meat is reported at 6%, down 0.2 percentage points from November after reaching a high of 11.7% in February 2022 and a recent low of 5.5% in October. 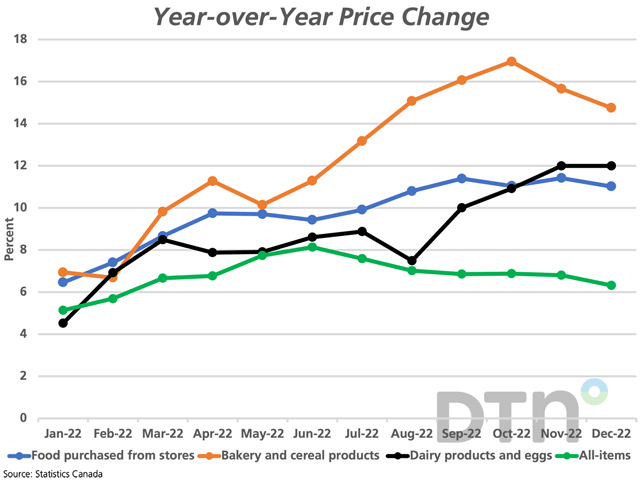