Over the eight-week period from Sept. 19 to Nov. 7, the spot Canadian dollar traded over a wide 367 basis point (or 3.67-cent) range. During the following nine weeks, trade ranged from the week of Nov. 14 to the week of Jan. 9 over a narrower 250-basis point range.

The spot dollar has closed higher on the weekly chart in each of the past four weeks, gaining 1.65 basis points in total, including a 25-basis point gain in the week of Jan. 9 to $.7469, settling in the upper one-half of the range traded during the past nine weeks. This is the smallest weekly gain seen during the previous four weeks.

Support on the daily chart (not shown) may be found at $0.7419 CAD/USD, the spot dollar 100-day moving average. Support on the attached weekly chart lies at $0.7322 CAD/USD, the 61.8% retracement of the move from the October low to November high, which has acted as support for roughly a month, from early December to early January.

Resistance lies at the November high of $0.7549 CAD/USD although trendline resistance drawn from the June high is seen at $0.75 CAD/USD which must first be breached. A longer-term perspective shows resistance at $0.7617 CAD/USD, which is the 38.2% retracement of the move from the 2021 high to the 2022 low.

The blue histogram bars on the first study shows the noncommercial net-short position in the Canadian dollar increasing for the fifth time in seven weeks in the week ending Jan. 10, reported at 30,955 contracts. This is the largest bearish position seen since the week of Aug. 17, 2020.

Equityclock.com reports the month of January as a weak month for the Canadian dollar, losing 0.5% on average during the past 20 years ending Dec. 31, 2022, gaining strength in just 30% of the years in this period. The seasonal tendency is for a 0.1% gain in February followed by a 0.2% gain in March on average, followed by the largest average percentage gain of the year of 1.1% for April. The Canadian dollar has strengthened 70% of the time in the month of April, the highest gain frequency seen during the course of the year. 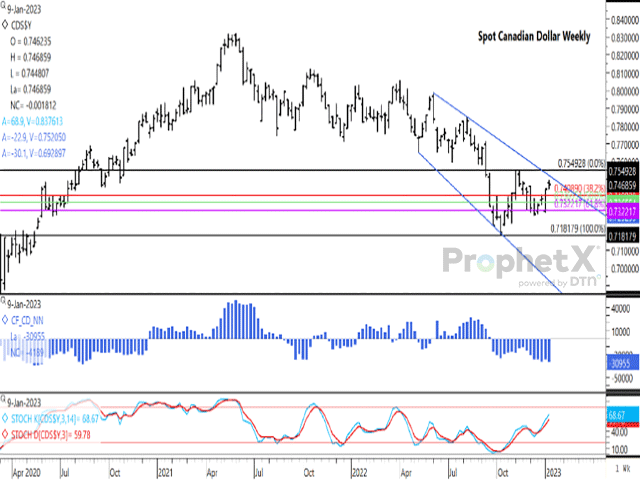