On Dec. 16, Agriculture and Agri-Food Canada is scheduled to release its December Canada: Outlook for Principal Field Crops report. In this report, supply and demand tables will be revised to include the latest changes in the production estimates released by Statistics Canada on Dec. 2, while based on November surveys conducted with producers.

The question is, to what extent do these revisions take place in the two years following the November estimates? As seen on the attached chart, revisions are rather insignificant for the majority of the principal field crops, but are common in the largest crops of wheat and canola during the past five years.

During the past five years (2017-2021), there were two modest upward revisions made to the durum estimate along with one larger increase of 384,290 metric tons (mt) seen for the 2021 crop. This is calculated by looking at the December release of the November estimates each year, while comparing to the current volume reported for each year by Statistics Canada. During the past five years, the durum estimate has been revised higher by an average 92,899 mt.

The largest revisions seen for all crops is found in the canola data. The canola production estimate has been revised higher in each of the past five years following the November estimate release, while in excess of 1 million metric tons (mmt) in two of the years, as high as 1.263 mmt in 2019. The five-year average increase is 743,200 mt.

Will this year be different for canola? Statistics Canada revised its production forecast lower by roughly 925,000 mt, with estimates falling closer in line with estimates reported in provincial government crop estimates. At the same time, Dow Jones commentary on ProphetX indicated the industry that was polled was split on whether Statistics Canada would revise its production forecast higher or lower when it reported on Dec. 2. 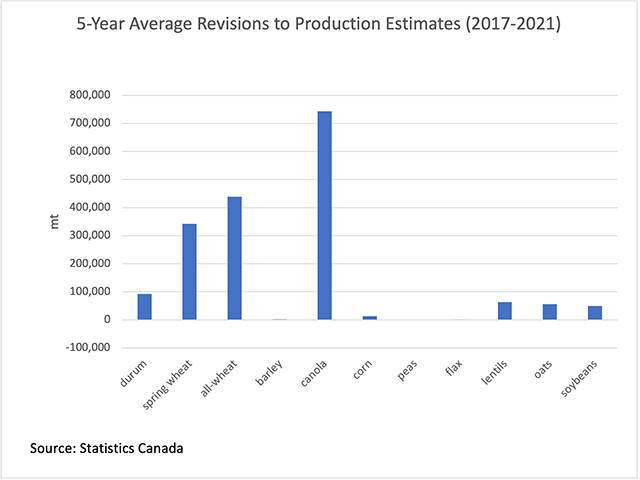