Statistics Canada released its final crop production estimates for the year, this time based on the input of 27,200 producers interviewed over the Oct. 7 through Nov. 14 period. This analysis differs from the two previous production estimates that were based on model data while this report includes producer surveys across all provinces. While this is the final official release of estimates for 2022-23, all estimates are subject to revision for a two-year period.

One theme in today's report we have talked about all fall is that provincial government crop inspectors walked fields this summer and talked to producers before, during and after harvest and in many cases came up with lower yield estimates than Statistics Canada's model-based estimates, which were based on August model data. In many cases, including for the largest prairie crops, they were proven correct.

Winter wheat production was revised higher this month, with production at 2.701 mmt due to an upward revision in Ontario's production, while 5.1% higher than the five-year average.

When Agriculture and Agri-Food Canada's wheat (except durum) supply and demand forecast is adjusted for today's revisions, we see that exports could be left unchanged at 18.5 mmt, while ending stocks would be revised 205,064 mt lower to 4.9 mmt, still 58% higher than 2021-22. As of week 17, cumulative licensed exports of wheat excluding durum are up 53.6% from last year, ahead of the 49% increase currently forecast by AAFC.

Statistics Canada revised their durum forecast 674,469 mt lower to 5.443 mmt, below expectations, while up 79% from 2021 and 7.3% higher than the five-year average. This points to a much tighter situation for the durum balance sheet for 2022-23. Crop year supplies will be close to 6 mmt, with AAFC estimating exports at 5 mmt and domestic use of 821,000 mt. Ending stocks are poised to fall below the 579,000 mt estimated for 2021-22, while the pace of exports bears watching closely.

As pointed out in the Canada' Markets Blog in recent days, provincial canola yield estimates pointed to the potential for a substantial drop in estimated canola production, which was confirmed in today's estimates. Statistics Canada has estimated canola production at 18.174 mmt, down 924,993 mt from their previous estimate. While up 32.1% from 2021, this volume is below pre-report estimates and is down 4.7% from the five-year average. It is ironic that this lower revision in production comes just one day following the U.S. Environmental Protection Agency (EPA)release of the final rule including canola oil derived renewable diesel that will qualify as an advanced biofuel under the current Renewable Fuel Standard.

This is a bullish outcome for the canola market; AAFC has previously forecast 19.574 mmt of demand for 2022-23 (crush plus exports), which is now 425,000 mt higher than total crop year supplies given the revised production forecast. Given this forecast, canola will have to be rationed in 2022-23; at the time of writing, January canola is up $22.70/mt while soybean oil is trading lower. At the same time, ProphetX comments this week indicated that the trade was split on whether canola production will be revised higher or lower in today's report and this uncertainty may prevail.

A sharp rise in yields helped barley production overcome a drop in harvested acres, with production of barley revised higher in today's estimate. The barley production estimate was increased by 559,160 mt to 9.987 mmt, higher than expected, up 43.5% from last year and up 12.6% from the five-year average. Barley stocks were previously forecast to remain close to unchanged and near record lows, while today's report may support even higher exports and domestic use with stocks expected to remain tight.

A combination of higher acres and yields led to an upward revision in oat production this month, with production revised 572,000 mt higher from the August estimate to 5.226 mmt, above expectations, up 86% from last year and 39% higher than the five-year average.

Given Friday's estimates, the August model data overstated the potential for chickpea, dry pea and lentils crops. Lentil production was revised 476,330 mt lower to 2.301 mmt, up 42.2% from last year while 0.9% lower than the five-year average. The current AAFC forecast points to a 400,000 mt carry-out for 2022-23, while supplies will clearly need to be rationed over the balance of the year.

Statistics Canada's soybean production estimate was left near unchanged at 6.543 mmt this month, which is 4.3% higher than last year while 3.5% lower than the five-year average. There will be little change to the forecast for the year, with AAFC currently forecasting a tight level of ending stocks of 300,000 mt, close to unchanged from the past two years.

It is interesting to note that Ontario, the country's largest soybean producing province, harvested a larger acreage in 2022, close to the largest soybean area ever, but yield is estimated to fall by 3.6 bushels per acre from last year's record to 48 bpa for an overall drop in production year-over-year of 86,316 mt. Meanwhile, Manitoba's harvested acres fell by 180,400 acres but yield increased by 15.9 bpa for an increase in production of close to 355,000 mt from 2021.

Statistics Canada estimated Canada's corn production at a record 14.539 mmt, down 322,365 mt from the previous estimate. This volume is below pre-report estimates, while up 4% from last year and 5.5% higher than the five-year average.

While Ontario harvested a record acreage of 2.239 million acres, yield fell by 9.2 bpa year-over-year to 166 bpa for a modest drop in production from 2021. Once again, the big change came from Manitoba, where harvested acres were close to unchanged from last year while yield increased by 47.5% or 45.4 bpa for a year-over-year increase in estimated production of 448,986 mt to a record 1.331 mmt.

This year's Ag Summit will be held virtually on the mornings of Dec. 12-13, so you can join from the comfort of your own home. Further details can be found at http://www.dtn.com/… 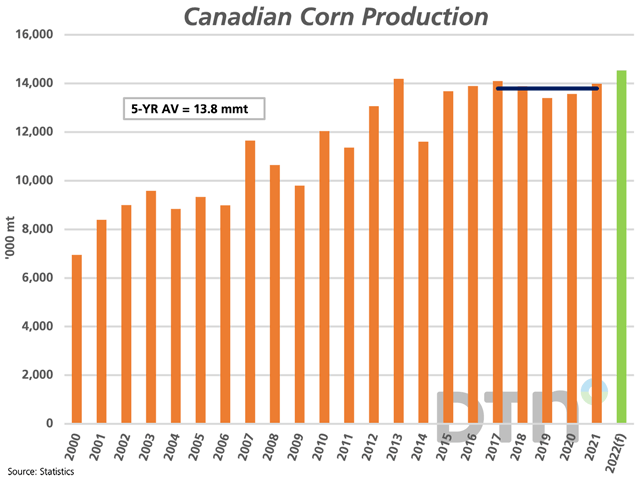