Monday's trade saw a push above the contract's 100-day moving average, while Tuesday's session saw a further push above this resistance, with the daily closed above the 100-day average for the fifth time in eight sessions.

In sight is the October high of $898.50/mt, along with psychological resistance at $900/mt. The next chart resistance is seen at the July high of $904.30/mt and the 38.2% retracement of the move from the contract high reached in April to the recent low reached in September, calculated at $909.40/mt.

A couple of interesting signs in today's session is the daily volume in the January contract, reported at 25,349 contracts (first study), the highest daily volume seen during the life of the contract, while 24% higher than the previous high reached in October.

The second study shows a less bearish approach to trade, with the Jan/March spread narrowing by $3.70/mt to minus $1.90/mt, close to the recent low of minus $1.40/mt, which was the narrowest spread seen since June 10. This is signaling strengthening front-end demand.

The blue bars on the histogram seen in the third study shows noncommercial traders reducing their bearish net-short position in canola futures for a fifth straight week as of Oct. 25, now holding the smallest bearish position seen since July 12, or in 15 weeks, at 14,807 contracts. Uncertainty in the Black Sea region, with Ukraine a significant player in the export of sunflower seed oil, will likely result in speculative traders paring this position for a sixth week when the CFTC reports on Friday. 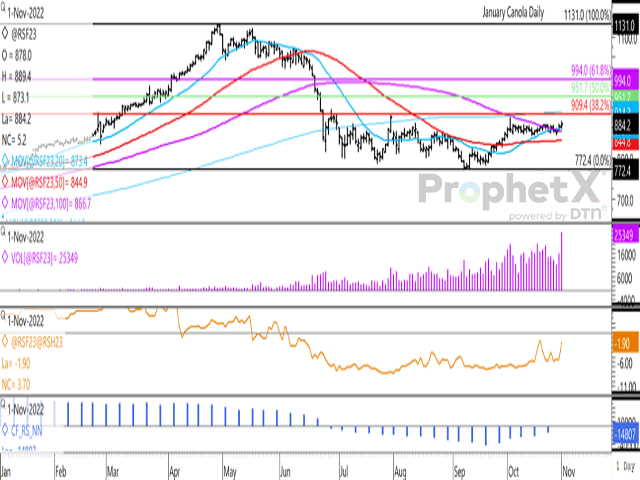