No. 1 large green lentils increased by 3.5 cents to 52.5 cents per pound delivered to Saskatchewan plants in Saskatchewan Agriculture's weekly report, while Statpub.com shows this bid unchanged to start the week.

This represents a sharp divergence from the five-year seasonal trend (grey line)which points to a gradual hike through to week 2 or the second week of January, ahead of the Indian rabi harvest.

In September, the Indian government's First Advance Estimates estimated kharif (summer) crop pulse production at 8.4 million metric tons (mmt), down significantly from the targeted 10.55 mmt. This will lead to increased focus on the Rabi crop ahead while increasing interest in imports.

As well, excessive rains in eastern Australia will decrease the potential output from that country. Australia's September Crop Report included a forecast of 924,000 metric tons (mt) for 2022-23. DTN weather reports point to heavy rains moving through eastern areas of the country during the Oct. 29-30 weekend, adding to the excessive rainfall already received, while a drier pattern is forecast into mid-November.

Canada's September exports will be released on Nov. 3, while August shipments of 115,441 mt were 16% higher than the five-year average. As of week 12, or the week ending Oct. 23, bulk exports through licensed facilities were up 23.4% from the same period last year, while Agriculture and Agri-Food Canada's October forecast is pointing to a 43.8% increase in exports in 2022-23.

Commercial stocks as of week 12 are reported at 193,600 mt, which are up 48.4% from the five-year average and signal the potential for favorable bulk shipments ahead.

AAFC's monthly analysis released in October forecasts the large green/red lentil spread to be smaller than the previous year in 2022-23. Saskatchewan government weekly data shows this spread ranging from 2.5 cents/lb. on the first week of the crop year or the first week of August in 2021-22, while ranging as high as 18.83 cents in the last week of November/early December. This spread was reported at 18 cents in week 43 or the week of Oct. 26, close to the highs reached over the previous crop year and bears watching. 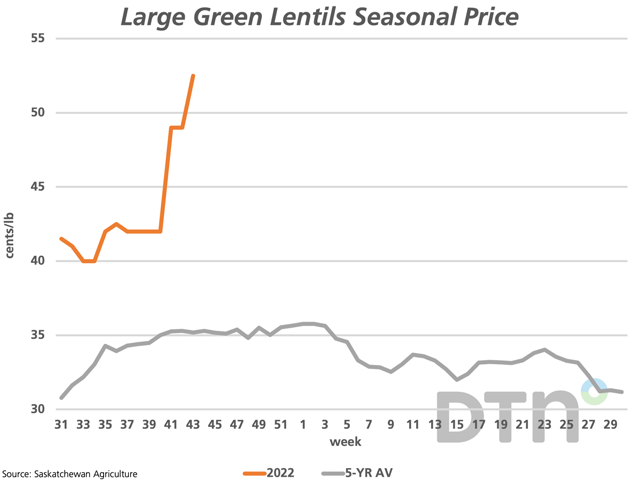