This week's September USDA World Agricultural Supply and Demand Estimates (WASDE) report saw an upward revision in the agency's global wheat production estimate, from 779.6 million metric tons (mmt) estimated in August to 783.92 mmt in September, which would result in a fresh record for global production if achieved. This would be 22.212 mmt or 2.9% higher than the five-year average production.

The USDA's forecast for global domestic consumption or disappearance also increased by a modest 2.42 mmt during the past month to 791.02 mmt.

When the spread in these two numbers (global demand and global consumption) is calculated, we see that consumption is forecast to exceed production by 7.1 mmt in 2022-23, as shown by the black line plotted against the secondary vertical axis. This would be the third consecutive year that consumption has outstripped production, by an amount totaling 29.639 mmt.

In addition, this would be the fourth time in five years that consumption is seen exceeding production, while would be the first consecutive stretch of three years where consumption was reported above production since the period from 2001-02 to 2003-04. 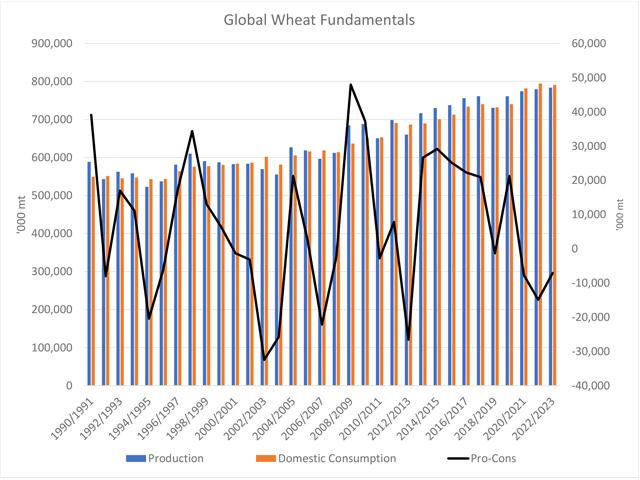