While Tuesday's USDA report revealed unfavourable data for oilseed markets overall, the canola market's tighter fundamentals should play a role in trade prior to the arrival of new crop, with Tuesday's trade perhaps offering a glimpse of what is to come.

While soybeans reached a one-year low Tuesday on the continuous chart, the May canola contract gained $4.80 per metric ton while nearing a test of three-week highs. The lower-study on the attached chart shows the May/July spread, which has narrowed or strengthened $3.20/mt so far this week to end at minus $0.30/mt, nearing a bullish inverse (May trading over the July) which would represent the first inverse seen since Dec. 1.

Canola's five-year seasonal trend would suggest the potential for prices to continue to move higher into the summer months, while last week's weekly close of $489.10/mt falls in the lower 55% of the range of prices traded over the past five years for that particular week, which could point to the potential for an upside move given the ongoing record pace of demand combined with the potential for dwindling supplies.

Should canola fail to breach resistance, basis may be forced to do the heavy lifting to encourage deliveries. There's indications of some basis levels reaching (or approaching) zero or option price at certain locations in the central prairies for April or May delivery, with some strengthening as much as $30/mt or more since the beginning of April. The prairie average was calculated at $17.26/mt under the May, still weaker than calculated this time last year.

The continuous active canola/soybean spread, measured in Canadian dollars/mt, finished at $35/mt (canola trading over soybeans), the strongest spread seen in one year. Resistance lies on the spread chart at the April 2016 high of $45.69/mt.

Perhaps of interest is a USDA Economic Research Service report that popped up on Twitter Tuesday. The report points to the fact that soybean oil still makes up the largest share of U.S. domestic vegetable oil demand, accounting for over 50% of the oil consumed in 2016. At the same time, the report shows competing oils, such as canola, corn and palm oil usage growing at a faster pace. Between 2011 and 2016, soybean oil demand grew by 11%, while canola oil usage grew by 66%, corn oil by 57% and palm oil by 21%.

This week's poll asks how you view the prospects of the wheat market for the upcoming year. You can weigh in with your thoughts on this week's poll, found at the lower right of your DTN Homepage.

DTN would like to thank all for their past contributions to this ongoing poll. 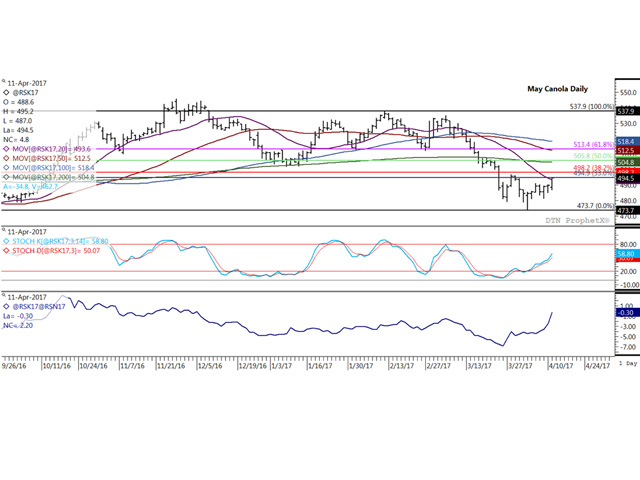