Farm Credit Canada's annual look at Canadian farmland shows prices continuing to grow on average, although the rate of growth is in decline. Since reaching a recent high of 22.1% annual growth in 2013, year-over-year growth has fallen each year to 7.9% in 2016, a six-year low. By province, this ranged from a modest year-over-year percent increase of 4.4% in Ontario to 9.5% in Alberta. FCC reports the country's average land price has grown every year since 1993.

One observation is the increase in land prices is a sign of optimism in agriculture. For example, the report indicates that land prices in Alberta saw the largest year-over-year growth for a major grain-producing province of 9.5% in 2016, despite the depressed energy sector and reduced prices seen for land surrounding cities due to the challenging economy. Another positive sign is the mention of "non-typical buyers" in southern Alberta, who also signal optimism. Reports of price driven by the supply-managed sectors such as dairy, poultry and eggs also signal optimism within these sectors.

The FCC report keys on the notion that no two regions are alike. Indeed, two of the six farmland regions in Saskatchewan saw no growth in values on average, while the southwest region grew by 16.6% to be the highest year-over-year growth seen in any region of the major grain-producing provinces. Returns from crops such as lentils grown in this area of the province has played a key role in supporting market prices.

FCC also mentions the combination of low interest rates and a weak Canadian dollar playing a role in sustaining the long-term growth in land values. They note the effective business interest rate reported by the Bank of Canada reaching a record low in late 2016, while the spot Canadian dollar fell from an average of $0.7828 CAD/USD in 2015 to an average of $0.7559 CAD/USD in 2016. This is expected to push crop receipts for 2016 to a record of over $32 billion. FCC is estimating crop receipts to grow by 2% over 2015 levels, which would place 2016 crop receipts at a record $32.585 billion. At the same time, receipts totaled $24.325 billion as of September 2016, while over the past three years, the first nine months of the calendar year generated an average of 73.6% of total annual crop receipts, which could result in total cash receipts closer to $33 billion.

This week's poll asks how you view the prospects of the wheat market for the upcoming year. You can weigh in with your thoughts on this week's poll, found at the lower right of your DTN Homepage.

DTN would like to thank all for their past contributions to this ongoing poll. 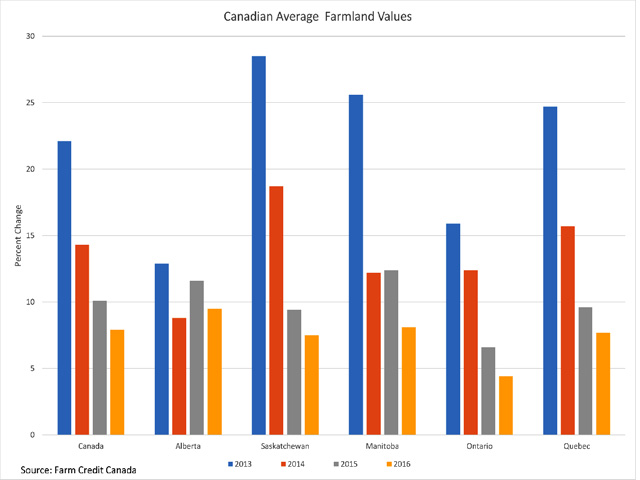