Marketing Canada's lower-quality durum crop will prove a challenge for sellers, although there are reports of numerous trains of low-quality stocks being shipped from western Saskatchewan to export position on the West Coast. This is good news, given the recent Canada report that estimated Dec. 31 stocks at 6.901 million metric tons, up a whopping 63.1% from the previous year and a record level for this date.

Cumulative exports as a percentage of expected crop-year exports do continue to lag past years despite a drop in AAFC's estimated export demand from as high as 5.3 mmt early in the crop year to the most recent revision to 4.5 mmt. As of week 26, licensed exports total 44.9% of the estimated 4.5 mmt export program, while in 2015/16, 51.4% of total exports had been reported at this time with the five-year average calculated at 50.2%.

A look at cumulative export data as of the end of December in the Canadian Grain Commission's Exports of Canadian Grain and Wheat Flour report shows nine countries who had been shipped durum in the August-through-December period of 2015/16, totaling 368,300 metric tons, who have no recorded exports this crop year. The largest is the country of Tunisia, having been shipped 184,200 mt in this period of 2015/16.

The attached chart shows the grade distribution of durum stocks held in terminal elevators as of week 26 compared to 2015/16 and the five-year average. Compared to average (blue bars compared to brown bars), current stocks of 1 CWAD as a percentage of total stocks are well-below average, stocks of 2 CWAD are above average and stocks of 3 CWAD are well-above average. The volume of lower grades held as a percentage of total stocks is just slightly higher than the five-year average at 28.7%.

You can weigh in with your thoughts on this week's poll, found at the lower right side of your DTN Home Page. 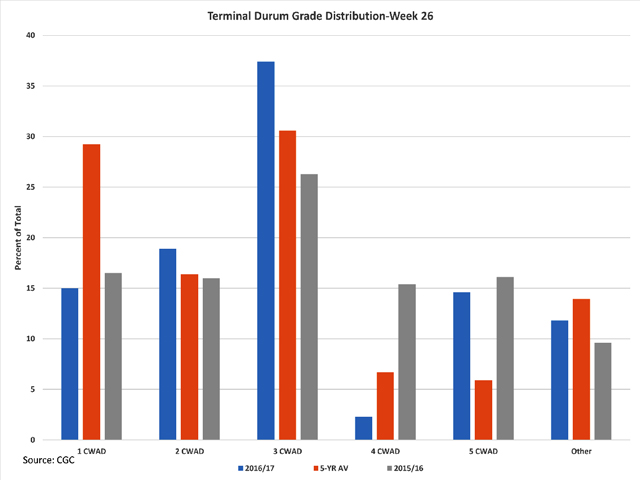