Canadian ag exports made headlines on Monday when the federal government's Advisory Council on Economic Growth released its second report, identifying agriculture and food as a core sector and one that can clear The Path to Prosperity, as the report is titled. The report states "The Canadian agfood sector has great potential, given the large natural endowment of water and arable land, distinctive record of accomplishments in research, and exceptional base of companies and entrepreneurs."

At the same time, the report indicates that much of the country's potential is untapped, with policies creating excessive regulations combined with other barriers to growth such as skilled labour shortages and a lack of physical infrastructure limiting growth.

The report has suggested that Canada's agriculture and food sector be used as a pilot project to focus on sector development, with the process to be copied across other industries.

It was a message perhaps met with some skepticism. First, this is a message the agriculture industry has delivered to Ottawa for decades. Premier Brad Wall of Saskatchewan responded on Twitter: "Here's a pilot project idea that would help Canadian Ag...don't implement a carbon tax."

Prior to the release of the report, Murad Al-Katib, president and CEO of AGT Food and Ingredients, told Business News Network that Canada is rated fifth in global ag commodity exports and number eight in food exports, while both industries should be targeting to be in the top three. Issues such as market access and infrastructure spending are key to the country's success. He also suggests that market access and open borders around the world may require Canada to take a hard look at its supply-managed poultry, egg and dairy sectors that remain contentious issues with the country's trading partners.

In other trade-related news, Statistics Canada released the monthly Canadian international merchandise trade, December 2016 report Tuesday. The country posted a second consecutive trade surplus of $922.8 million, after having reported monthly trade deficits since October 2014. The news was not all good in that the trade surplus was 1) lower than November 2) was below expectations and 3) was achieved due to higher energy prices while total exports were actually 1.4% lower in real terms and points to the ongoing struggle in the Canadian economy's recovery.

Here is a look at selected commodity trade data released in Tuesday's report.

Lentil exports in December was reported at 326,757 metric tons, a three-month low but still the largest December movement ever. Year to date, (August through December) movement totals 1.44 million metric tons, 94% of the volume shipped in 2015/16 but 62.8% higher than the five-year average, as seen on the attached chart. As of December, 71.9% of AAFC's 2 mmt target has been shipped, well ahead of the pace needed to achieve this target with data covering the first 42% of the crop year.

A total of 7,840 mt of mustard was shipped in the month of December, the smallest monthly movement seen this crop year. As of the end of December, 48,835 mt has been shipped, 2.5% higher than the same period in 2015/16 but only 93.9% of the five-year average for this period. Cumulative volumes shipped are just slightly ahead of the pace needed to reach the current AAFC target of 115,000 mt, with 42.5% of this volume reached in the first 42% of the crop year.

In December, 10,035 mt of canary seed was exported. Cumulative volumes in the first five months of the crop year total 55,247 mt, a volume that represents 85% of the 2015/16 volume in the same period and 84% of the five-year average. The current volume reflects 48% of the current 115,000 mt annual export target set by AAFC, ahead of the cumulative volume needed to stay on track to reach the current crop year target.

Chickpea exports in December totaled 12,583 mt, the highest monthly volume shipped this crop year although this volume is lower than the volume shipped in December 2015. Year to date, 42,448 mt has been shipped. This volume reflects 74% of the volume shipped in 2015/16 and 149% of the five-year average. Given that this data represents 42% of the crop year, cumulative exports account for 44.7% of the 95,000 mt forecast released by AAFC in January and ahead of the cumulative pace needed to reach the target.

Dry pea exports are also well ahead of past years. 347,670 mt was shipped in December, a two-month high but still likely the biggest movement ever seen during the month of December. 1.99 mmt has been shipped as of the end of December, up 13.4% from the same period in 2015/16 and 46.3% higher than the five-year average. As of the end of December, 62.3% of AAFC's 3.2 mmt export target has been achieved, well ahead of the pace needed to reach this target given that the data covers 42% of the crop year.

December's corn exports totaled 57,520 mt, down sharply from the previous month when 180,879 mt were shipped. Year to date (September through December), 304,429 mt has been shipped, 6.7% higher than the same period in 2015/16, while is 26.1% higher than the five-year average. Exports have gotten off to a slow start when compared to AAFC's annual export target, with the cumulative volume representing just 22.6% of the current 1.35 mmt target with the first four months of the crop year, reflecting 33.3% of the crop year.

December soybean exports totaled 645,756 mt in December, down sharply from the 1.2 mmt shipped in November, the largest monthly volume ever shipped from Canada. Year to date, exports totaled 2.833 mmt (Sept through December), 7.3% higher than the volume shipped in the same period last year and 28.7% higher than the five-year average. This volume represents 64.4% of the current AAFC target of 4.4 mmt, with only 33% of the crop year data accounted for.

You can weigh in with your thoughts on this week's poll, found at the lower right of your DTN Home Page. 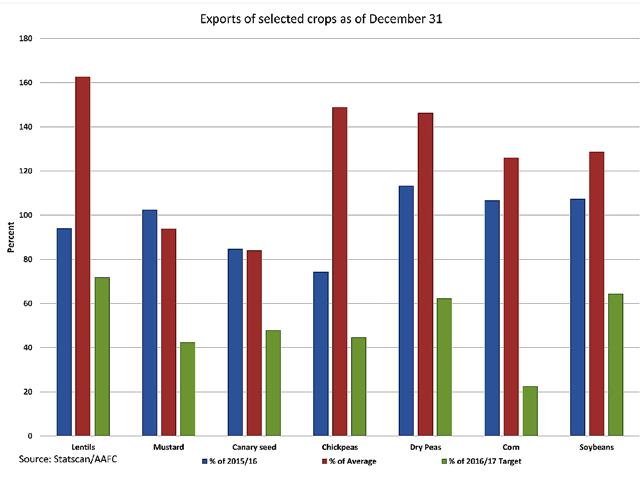 Philip Shaw
2/8/2017 | 5:53 AM CST
Interesting statistics on ag exports. From an Eastern Canadian perspective concentrating on exports has always been a race to cheap. Its one of the biggest differences between East and Western Agriculture. For instance, approximately one third of Ontario's soybeans are value added, and then exported. Interestingly enough, even GMO soybeans are exported in huge numbers on containers. Sometimes corn is exported to the US, but this is like exporting snow to Canada in January. It's done usually as a stop gap to storage and or a nuance of the crazy basis market in the East. I've seen corn loaded in Chatham, unloaded in Michigan, corn picked up there on the same truck and brought back to Chatham on the same day. That's an export and an import of the same commodity on the same day. I'm sure its done with many others across Canada. In the East, any emphasis on ag exports is a race to the cheapest prices possible. That's one reason why its seen as much less important here. However, we'll take it, as we can't be an island. However, increasing the processing and keeping at home is always the first option. Premier Brad Wall's contention of the carbon tax is interesting, however it doesn't reflect the political reality in Ontario and Quebec. Its more of a pragmatic approach IMO, on a policy which isn't going away as even opposition parties support it in Ontario and Quebec. The most vulnerable part of Canadian agriculture regarding trade, hands down, the Dairy and supply managed economy which dominates parts of Ontario and Quebec. Quebec farmers will explode under such a scenario with civil disobedience, shutting down free ways, border crossings ,hell has no furry but to cross Quebec farmers. It should get interesting, but hopefully SM will be sustained.