Wednesday's Statistics Canada Principal field crop areas June 2016 report carried on with this year's theme of fewer acres seeded to cereal crops such as spring wheat, barley and oats in favor of increased plantings of crops such as lentils and peas. Surprises in the Wednesday report include fewer acres of both barley and flax than expected in pre-report trade estimates, while records were set in terms of historic lows in acres left in summerfallow and lentil acres reached a record level.

Canada's all-wheat acres (including durum) were estimated at 23.177 million acres, down 669,300 acres from the April estimate based on March surveys but well within the 22.8 million to 23.8 million acre range estimated in Commodity News Service pre-report estimates. This is down 3.9% from 2015 and below both the five-year and 10-year averages.

The country's durum acres were estimated at 6.1 million acres, just slightly below the April estimate but within expectations that ranged from 5.9 million to 6.3 million acres. This could be the highest acreage seen since 2002, with Saskatchewan producers planting 5 million acres, unchanged from 2015 while Alberta producers boosted acres by 34% to 1.1 million acres to match the province's record set in 2002. The timing of this expanded durum acreage may prove to be favorable, with G3's latest Pool Return Outlook holding Annual Pool PRO's steady as of June 23 data, while all grades of CWRS fell by $7/mt. Commentary points towards downgrade concerns in the European crop given the heavy rains received in recent weeks.

Spring wheat acres fell by 3.7% from the April estimate to 15.449 million acres. This area is down 9.2% from 2015 and the smallest estimate since 2007. Manitoba producers trimmed acreage by 3.8% from 2015 to 2.805 million acres, Alberta farmers seeded 8.5% fewer acres at 5.360 million acres and Saskatchewan growers are estimated to cut acres by 11.9% to 6.875 million, which is the smallest planted acreage seen since 1970 when 5.5 million acres were planted. Supplies of Canada's all-wheat (excluding durum) will be roughly 25 mmt in the 2016/17 crop year when extrapolating from current AAFC estimates, the lowest since 2007/08, while will require export projections to be trimmed and will still result in historic low stocks on the prairies next crop year.

There was little change reported for canola acres. Total acres were reported at 20.020 million, up 3.5% from the April estimate but well within the 19.3 million to 21 million acre pre-report trade estimate. Overall acres are estimated to be 0.4% below 2015 levels. This area is below the five-year average of 20.427 million acres and would be the lowest seen since 2010/11 and should be supportive for the market in a world of growing demand for vegetable oils.

Perhaps the biggest story today is the continued climb of both dry pea and lentil acres. As has been expected over recent months, Wednesday's estimates confirm the combined acreage of over 10 million acres. Lentil acres were increased in Wednesday's estimates to 5.840 million acres, near the higher end of expectations, which is a record and a whopping 48% increase over last year. The dry pea acreage was trimmed slightly from the April estimate but are within expectations and 16.1% higher than 2015 at a record 4.274 million acres.

Wednesday's estimates suggest that barley acres will not continue to recover from 2014 lows as expected in the April report, with acres expected to fall 2.2% from 2015 to 6.385 million acres, below the five-year average. Oat acres were also trimmed from the forecast released in April to 2.861 million acres, down 14.3% from last year but within expectations. Perhaps of interest is the year-over-year drop of 350,000 acres, or 12.3%, of the oat acres seeded in the prairie provinces, which suggests that stocks will tighten drastically over the upcoming year.

One other crop taking a hit in Wednesday's report was flax. Flax acres were estimated at 925,000 acres, down 17% from the April report and 43.6% lower than estimated for 2015. This would be the lowest acreage seen since 2010/11 and will lead to tight stocks in the upcoming crop year.

Canada's estimated corn acreage was trimmed from the March estimate to 3.330 ma, up 1.7% from last year and close to being equal to the five-year average. This compares to the expected 5.4% increase in United States acreage in 2016, based on the average of pre-report estimates ahead of Thursday's USDA Acreage report. Quebec producers are expected to reduce acres by 1.4% to 889,600 acres, a two-year low. Ontario producers are holding acres steady at 2.050 ma, down 0.2%. Seeded acres in Manitoba are expected to jump 30% to 325,000 acres, a three-year high and above the five-year average for the province.

Canada's soybean acres were hiked from the earlier April estimate to 5.465 million acres, up 1% from last year. This compares to an expected increase of 1.6% in the U.S. based on the average of pre-report estimates ahead of Thursday's report. This remains slightly below the record set in 2014 of 5.562 ma, while is well above the five-year average. Quebec producers are expected to plant 3% more acres to 803,100 acres. Ontario producers are estimated to trim acres by 6.4% to 2.715 million acres, a three-year low. In the west, Manitoba producers are forecast to increase plantings for the ninth consecutive year to a record 1.625 ma, while Saskatchewan producers are expected to reduce acres by 13% to 235,000 acres.

The overall market impact seems muted Wednesday, although canola prices may draw some support from the report. Trade will likely be subdued with a much larger focus placed on Thursday's USDA Quarterly Stocks report and Acreage report. 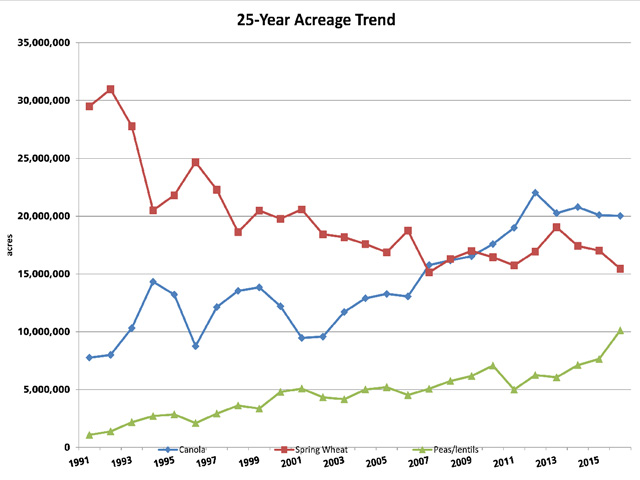