According to pre-report estimates ahead of Wednesday's Statistics Canada Principal field crop areas report, Canada's area seeded to oats could be the lowest in history. The pre-report estimates prepared by Commodity News Service and reported by Producer.com indicate that the trade is looking for planted acreage to fall in the 2.4 million to 3 million acre range, which compares to the 2.972 million acre estimate released in April and the 3.337 million acres seeded in 2015. The lowest seeded acres on record in Canada were seen in 2014 when 2.823 million acres were planted, the lowest in Statistics Canada data going back to 1908. The recorded high was seen in 1921 at 16.949 million acres.

It was expected by many that oat acres would be under pressure given the weak market signals earlier this year. Pre-report estimates ahead of the April report were looking for an area in the 2.8 million to 3.2 million acre range, while Statistics Canada responded with an estimate which fell almost in the middle of this range.

As shown in a Canada Markets Blog earlier this month, there is a tendency for Statistics Canada to report a smaller acreage of oats in the June report when compared to the earlier March estimates. In the 2011 through 2015 period, oat acres in the June report fell in each report, ranging from a reduction of .2% to a maximum of 9.4%, while averaging 5.3%. During the same period, acres seeded to both canola and lentils tend to be increased in the June report, which is what is expected by many to take place in Wednesday's report.

Oat futures show no concerns over a reduced acreage. As seen on the attached graphic, December oats have been in a downtrend since a recent June 9 high of $2.34/bu, with Monday's $2/bu low just one cent above the $1.99/bu March 2 contract low. Tuesday's trade has consolidated within Monday's trading range, while ending closer to the lower-end of the seven-cent range traded today, up 1 3/4 cents to $2.02 1/2/bu.

The lower two studies indicate a divergence in actions taken by noncommercial and commercial traders as seen in the latest CFTC data. AS of June 21 data, noncommercial traders moved from a bearish net-short futures position to a net-long position of just 10 contracts (third study, green bars), the first net-long seen since early May. This Friday's report will show whether this group will build on this position.

At the same time, the lower study shows the net-short position held by commercial traders (blue bars) increasing for six consecutive weeks to 1,321 contracts, the largest net-short seen since the week of January 5.

Another sign of commercial bearishness is seen in the second study, where the black line represents the new-crop December/March spread. While this spread has narrowed 3/4 cents over the past three days to a 12 1/2 cent carry this session, over the past five years (2011 through 2015), this spread has traded anywhere from a 3-cent inverse (December over the March) to an 11 cent carry, averaging a five-cent carry on this date.

AGCanada.com published a piece this week titled Cash oats disconnect form falling futures, indicating that Canadian producers have drawn a line in the sand at $2.75/bu CAD in Saskatchewan and $3.00/bu in Manitoba, with oat trade on the prairies increasingly transacted as a cash contract, with hedging futures leading to increased risks given that the CME delivery specs do not meet milling quality. The lack of price signals has not bode well for Prairie production. 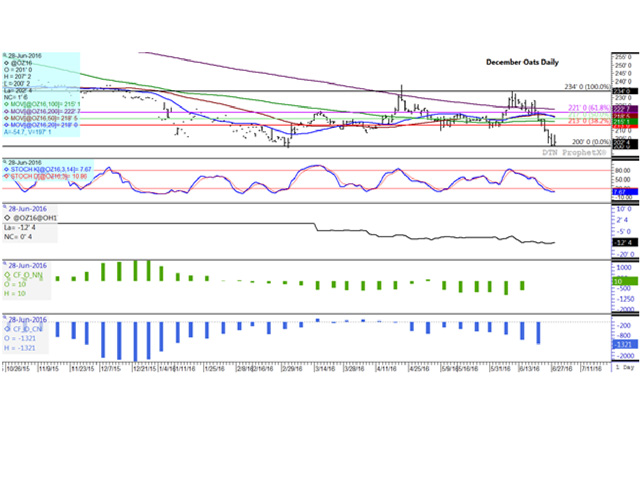