Saskatchewan crop ratings may continue to be a potential negative influence on market prices, with many crops showing condition ratings improvements as of the most recent June 27 report from the previous high ratings released two weeks earlier.

Over the past two weeks, the crop condition indices for the 14 crops rated in the province, based on DTN's methodology of introducing multipliers to each of the excellent, good, fair, poor and very poor ratings, saw improvements in 11 of the 14 crops. Improvements over this period ranged from a 1 point improvement for peas to an index of 228 to a 17 point improvement for the chickpea crop to 220. Another large jump in ratings was seen in durum, which rose 14 points from 224 to 238 over the past two weeks.

The purple bars represent the contrasts with year-ago ratings for four selected crops. On June 29, 2015, the durum crop was rated at an index of 45, which was the lowest of all crops at the time. This is 193 below the current rating, while lentils were rated 140 lower, canola 114 lower and wheat 102 lower in late June 2015.

The driest area of the province is in the north-central area of the province. AAFC's Percent of Average Precipitation chart for this region in the April 1 through June 29 period is mostly 60% to 85% of average, with a small area around North Battleford rated at 40% to 60% of normal. Crop condition indices are lower given a higher degree of fair ratings, although spring wheat condition is still rated at 191 while canola is at 179.

NWS maps shows most of the province to receive moisture over the next seven days (1-1.5 inches), with the heaviest accumulation expected in days 4-7. Five-Day Highs Compared to Normal charts provided by DTN show daily highs to be normal to 3 degrees C above normal. 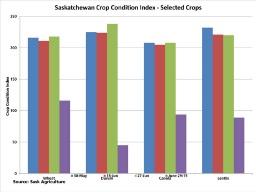