President Harry Truman famously said a recession is "when your neighbor loses his job; it's a depression when you lose yours."

To some politicians, a recession is a political football. When recession talk is in the air, the most important thing to these politicians is not how the national economy will fare. It's whether they, or their opponents, will be the ones to lose their jobs.

Recession talk is in the air today and politicians are kicking the football. Congressional Republicans are blaming the Democrats for the recession. The Democrats are responding, "What recession?"

Both parties have a point. By the traditional back-of-the-envelope definition -- two successive quarters of negative gross domestic product -- we're in a recession. Advantage Republicans.

But this doesn't feel like a recession. The economy keeps generating hundreds of thousands of new jobs every month and the unemployment rate is only 3.7%. The nonprofit organization that calls recessions, the National Bureau of Economic Research, hasn't called this one. Advantage Democrats.

For its part, the public seems far more concerned with inflation than recession. So does the Federal Reserve Board. As I wrote in June, "The Federal Reserve has decided to throw everything it has into fighting inflation, even at the risk of causing a recession." (https://www.dtnpf.com/…)

For two months this summer, the stock market acted as if the Fed would be easily distracted from its campaign to wring inflation out of the economy. Stocks rose into bull-market territory as investors saw signs inflation might soon slow and reasoned the Fed would "pivot" away from the campaign.

Investors, the New York Times explained "were forecasting that the Fed not only will stop raising rates next year but will need to cut them somewhat." (https://www.nytimes.com/…)

I like a stock-market rally as much as the next investor, but I always thought this one was based on wishful thinking. I wasn't as surprised as some investors apparently were by the hawkish speech Fed chair Jerome Powell gave recently in Jackson Hole, Wyoming. You can see their surprise in the steep declines in stock prices Powell's speech touched off.

In the speech, Powell said the Fed's "overarching focus" was on bringing inflation down to 2%, which he said would "require maintaining a restrictive policy stance for some time" and "using our tools forcefully." His only hint of moderation was that "at some point, as the stance of monetary policy tightens further, it likely will become appropriate to slow the pace of [interest-rate] increases." (https://www.federalreserve.gov/…)

And while Powell avoided the word "recession," he came close: "Reducing inflation is likely to require a sustained period of below-trend growth," he said. "Moreover, there will very likely be some softening of labor market conditions. While higher interest rates, slower growth, and softer labor market conditions will bring down inflation, they will also bring some pain to households and businesses. These are the unfortunate costs of reducing inflation. But a failure to restore price stability would mean far greater pain."

Fed officials meet again on Sept. 20-21 and after 0.75% rate increases at the last two meetings, Powell has warned that "another unusually large increase could be appropriate at our next meeting." Some economists think the next increase is more likely to be 0.5%, still a big move by historical standards. (https://www.reuters.com/…)

The size of the next increase will depend on the Fed's assessment of the economic data. The latest employment report showed that in August, the economy generated 315,000 new jobs, down from 526,000 in July, and the unemployment rate rose to 3.7% from 3.5%. Wage growth slowed. If the Sept. 13 consumer price report indicates a slowdown in price increases as well, those economists could be right.

It's not the next meeting's increase that's of concern to farmers, ranchers and other business borrowers, however. Their big worry is that inflation remains stubborn and Jay Powell is forced to raise rates into the stratosphere, as Fed chair Paul Volcker did in the early 1980s. This would be the "far greater pain" Powell alluded to.

Volcker imposed 20% interest rates because the inflation rate had neared 15%. Today's consumer-price inflation is only 8.5% and may be headed down.

Volcker was forced to adopt drastic measures because the Fed hadn't been bold enough early on. Thus, to avoid a rerun of the 1980s, the Fed may well feel it has to continue with "unusually large rate increases" for the foreseeable future.

Whether it can do so without causing a recession, and not just a slowdown in growth, is the question only time can answer. 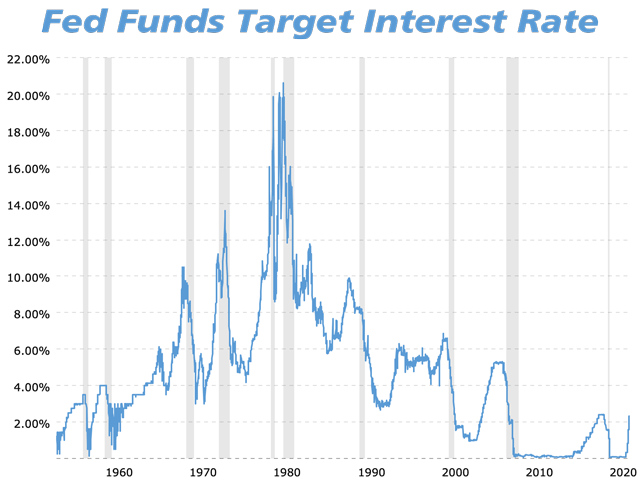