An "oxymoron" is a contradiction in terms, and I recently heard someone describe himself as one. The speaker (he was off-the-record so he must remain nameless) served in the administrations of Richard Nixon and George H.W. Bush. Back then, he said, being a Republican conservationist wasn't unusual. Today he feels like an oxymoron.

It was a startling self-description and I admit I thought he was exaggerating the rarity of this species. I personally know several Republican conservationists; I'm sure he knows many others.

Still, I understood what he meant.

Bush the elder was a member of Ducks Unlimited and signed the North American Wetlands Conservation Act. He played an important role in the passage of the 1990 Clean Air Act Amendments.

Though Republicans and Democrats back then often had different solutions to conservation problems, they agreed on the need to do something. Conservation was in many ways a unifying issue.

That has changed. It's hard to imagine any of those laws being enacted under a Republican president today. How, the speaker wondered, did that come to pass? How did we get from Nixon and Bush to our current divisiveness over conservation?

It's not that environmental concerns have eased. Yes, we've made some progress. The national bird, the Bald Eagle, is making a comeback thanks to the banning of DDT.

Many species of ducks, geese and other waterfowl are thriving thanks to that wetlands act Bush signed and the efforts of conservation groups, including those representing hunters, like Ducks Unlimited. The amended 1990 Clean Air Act has been called "the most sweeping and comprehensive environmental statute on the books" and has been credited with saving hundreds of thousands of lives. (See https://www.washingtonpost.com/…)

But from increasing global temperatures to expanding aquatic dead zones to accelerating biodiversity loss, many other environmental problems have worsened. For example, scientists say North American bird populations have declined 29% since 1970, a loss of more than three billion birds. (See https://www.scientificamerican.com/…) The National Wildlife Federation believes "as many as one-third of America's wildlife species are at increased risk of extinction." (See https://www.nwf.org/…)

Deep down, the speaker went on, many people, including many rural Americans, understand that the environment is in peril. If they're unenthusiastic about conservation, it's because they're afraid of what the government will do about the peril. To put it another way, they're not against conservation. They're against regulation.

If the speaker is right, and I think he makes a good case, there's a lesson for the government here: more carrot, less stick. If the government wants good things done for the environment, it should provide financial incentives. Let the public pay for public goods. Impose regulations more sparingly.

A good many conservationists will disagree. They'll argue strongly for regulation. Why, they'll ask, should people be allowed to defile the commons? Why shouldn't society penalize practices that put the environment at risk? Why pay people to do what they ought to be doing in the first place?

Whatever the theoretical merits of this argument, it's outweighed by a practical consideration: Regulation begets resistance. That was the speaker's point. Proposed regulations are bitterly fought in legislatures and courts. If they're imposed anyway, many disobey them or do the bare minimum.

Better, then, to pay for good practices, and (radical idea alert) make the payments big enough that a great many people enthusiastically embrace good practices.

Thankfully, there's movement in that direction. The farm bill already provides a variety of conservation payments and the administration and Congress are mulling more. In addition, as I pointed out last March, environmental groups are increasingly interested in working with farmers rather than against them. (See https://www.dtnpf.com/…)

Another encouraging sign is that there are 16 Republicans among the 32 Senate sponsors of the Recovering America's Wildlife Act. This bill would provide more than $1 billion for habitat management, scientific research and wildlife conservation. (See https://www.congress.gov/…)

Maybe oxymoron isn't the right word after all. 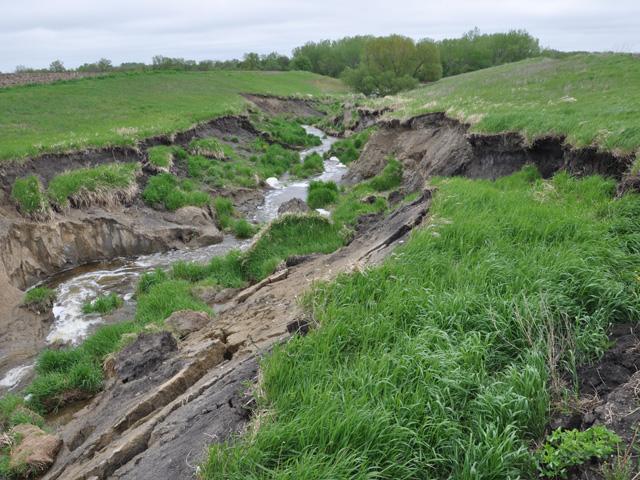