British food, alas, has long been the target of slings and arrows, some lighthearted, some downright mean. The punchline of one nationality-stereotyping joke defines hell as a place where the police are German, the engineers Italian and the cooks British. Former French Prime Minister Jacques Chirac once famously sniffed, "One cannot trust people whose cuisine is so bad." (http://news.bbc.co.uk/…)

Ever since my first trip to Britain in 1979 I have considered this derision at best exaggerated, at worst misguided. Yes, some British food is, well, basic, like the iconic Ploughman's Lunch (bread, cheese and onions), or the equally renowned Bubble and Squeak (fried leftover vegetables, often potatoes and cabbage). But lots of people, and not just Brits, find it tasty, and as the Romans used to say, "De gustibus non est disputandum" (there's no point arguing over matters of taste).

More importantly, the criticisms ignore the many ways British food has changed as the country has absorbed people and customs from its former colonies -- and beyond. On my first trip to London in 1979, my first dinner was at Khan's, a well-known Indian restaurant. Indian food has grown so popular in Britain that Chicken Tikka Masala is often said to be the national dish.

These days many other ethnic cuisines vie with Indian for popularity. On my most recent trip to Britain -- I'm writing this on the plane ride home -- the first dinner my family and I enjoyed was at a Nepalese/Indian joint in Edinburgh called the Gurkha Cafe and Restaurant.

During the course of two weeks in Scotland and England, we sampled an extraordinary variety of cuisines. Naturally, we had lots of classic British pub food in classic British pubs -- fish and chips, shepherd's pie, that sort of thing. But we also ate Turkish. Japanese. Lebanese. Singaporean Chinese. Indian. French. Indonesian. Arabic. Italian. Ethnic restaurants were everywhere.

Now, granted, what a tourist eats isn't a representative sampling of a nation's cuisine. It's all restaurant food, after all, and locals don't eat all their meals in restaurants. Still, the patrons in most of the restaurants we visited were overwhelmingly local. If they don't cook Singaporean Chinese or Lebanese food at home, they've developed a taste for it when they dine out.

One might also question whether culinary diversity is a British thing or a big-city-anywhere thing, as common to New York as to London. Fair point, but the Turkish and Japanese restaurants we patronized were in York--old York, the northern England town with a population of only 211,000.

York sported plenty of other ethnic restaurants, too -- Chinese, Middle Eastern and Thai, for example. My admittedly unscientific impression was that far more of York's restaurants were ethnic than, say, Omaha's. (The exception: Mexican, of which the United States has far more than the United Kingdom.)

In a much smaller town, Stratford-on-Avon, Shakespeare's birthplace, more of the restaurants were British. But we did notice a Thai restaurant called the Giggling Squid.

The slings and arrows, in short, fall wide of the mark. Gustatorily, Britain can hold its own with France, Italy and other European countries renowned for their cookery. Even the French have come to recognize the creative genius of British chefs. There are now 184 Michelin-star restaurants in Britain, almost as many as in the U.S.

The big difference is that British cuisine is so much more diverse than that of other European countries. I adore the food in Italy and France, but when I'm there I rarely eat anything other than Italian or French. There are so many fewer ethnic-food options in these countries than in Britain.

In a broad sense, Britain's culinary diversity reflects its ethnic diversity. Although we tend to think of the British as Anglo-Saxons, their islands have a rich history of immigration. Before the Angles, Saxons and Jutes there were the Celts and the Romans. Later came the Scandinavians and the Normans. In more recent times the country has become a haven for immigrants from India, Pakistan, Italy, Poland, the West Indies and many other lands.

A final thing worth noting: Restaurants in Britain today cater to vegetarians and vegans far more than they did three years ago when I was last in Britain -- and far more than most American restaurants I'm familiar with do. There are many more vegan options on menus. Almost every coffee shop serves a vegan sausage roll, for example. In Edinburgh, many restaurants even offer a vegetarian haggis, made from beans, peas, lentils and vegetables, as an alternative to the traditional version made from organ meats.

Does this say anything about the future that livestock raisers and feed-grain growers should care about? The statistics on vegetarianism and veganism in both countries are all over the lot, but by at least some measures about 9% of the UK population and 8% of the U.S. population fall into those categories. (See https://www.finder.com/… and https://www.statista.com/…) It won't be surprising, then, if U.S. restaurants increasingly follow Britain's lead. 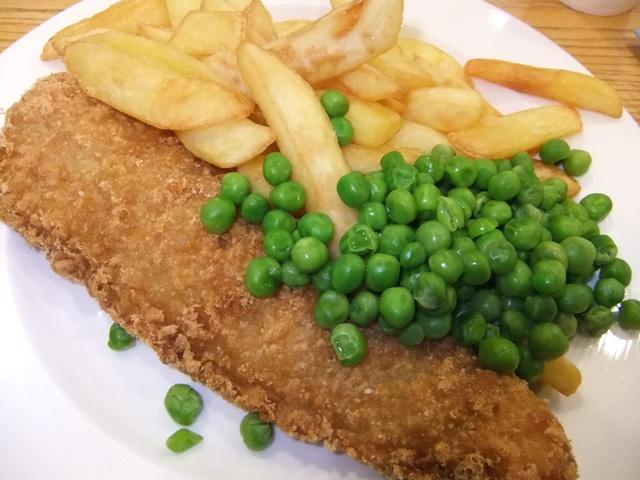